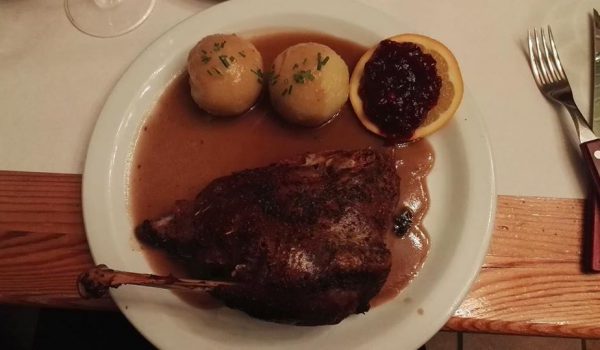 One must give Heuriger Pospisil credit: they are honest. Their web site does not claim that their goose is the best in Vienna. It merely says it is almost the best. Which is very true, because the best it is definitely not.

It could have been much better though, had the bird been cooked a bit less. OK, a lot less. The state in which it arrived at my table, it was so dry it actually looked shrunk. The skin was crunchy, which is a good thing, but with all the fat evaporated, it was also extremely thin. The meat was not tough (especially when thoroughly dipped in the weird yellowish goose-related sauce), but unpleasantly dark in color and dry. There was not much of it either, but if in some places, I would blame that on the cook’s stinginess, in this particular case I would rather consider it a side effect of overcooking.

Cabbage: OK without being special, served in a separate bowl for sharing. Dumplings: two of them, sticky and tasteless. Extras: a slice of orange with lots of berries on top of it – wonderful.

Unlike a number of earlier goose experiences this year, the Heuriger itself was very nice, authentic and generally pleasant to spend time in. There is a full-size menu (no Brettljause, unfortunately), and the choice of wines is quite impressive, though these are not cheap. Actually, nothing is cheap, but that may have to do with the location: the people owning the houses nearby must be rich. The goose was acceptable, and with a bit more work (or should I say less work?) would even have a potential of reaching the “very good” category, but sadly that potential was not realized.