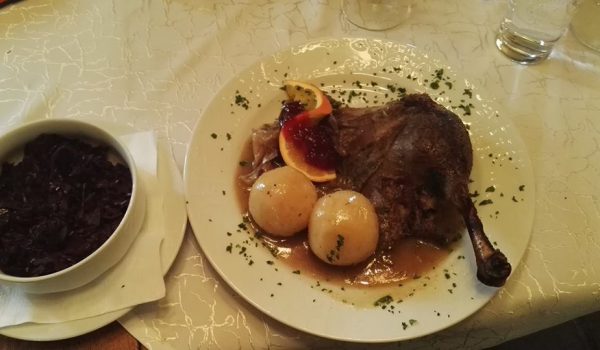 Sulz im Wienerwald and Postschänke in particular are the places that the future researchers will undoubtedly turn to when looking for the origins of my goose obsession. Seven years ago, this was one of the secret good goose places, where table reservations were a must, and to which people did not mind driving for half an hour from Vienna.

Over the past seven years, the good old Postschänke closed, reopened under a different owner, closed again and reopened one more time. Now it’s not Postschänke, but Stockerwirt just a kilometer away is the place where families go for Sunday lunches and where – as I have discovered – reserving a table is just as important as once at the Postschänke.

On the other hand, today Postschänke accepted me happily and even provided me with a goose, without any advance reservation. That, of course, meant that the goose was not especially fresh. In fact, my latest theory says that a good indicator of a microwaved goose is if it swims in a thick sauce of an orange color, like almost all geese this season.

Despite everything, it was not a bad goose. The leg (finally I have all but given up expecting a breast this year) had plenty of tender meat with just the right amount of salt and the skin of at least some crispiness. At times, the meat was a bit too tender, more resembling a chicken than a goose; perhaps, the bird had been boiled before it was roasted. The red cabbage had a bit of apples added to it, but generally tasted very industrial. The dumplings, on the other hand, had a bit more than zero taste, and thus compared favorably to almost any other dumplings this year. And there were berries, apples and a slice of orange, too, which is always good.

Frankly, the dish was not on par with the geese of the old Postschänke, and next year, if I am still alive and don’t turn vegetarian, I’ll probably call the Stockerwirt and book a table there. However, if your expectations are not high, the competent goose of Postschänke, combined with the very friendly service of the new owners will leave you quite happy.