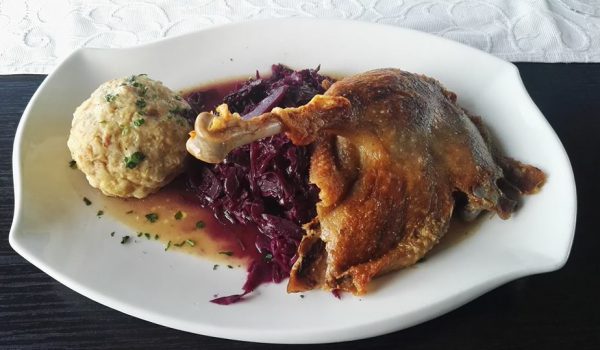 I should not have gone to Katamaran. A restaurant with such a name cannot serve anything good by definition. I really wanted to try something new, but after having been kicked out of the Hofgassl (the best restaurant in Rust) for the lack of reservation, I should have simply walked ten meters to the old and tested Römerzeche. Instead, I walked all the way to the lake and did not even turn around when the overstressed waiter told me he had to check with the cook if any food was still available.

I suppose, considering the circumstances I should be happy I did not get anything worse. What I got was a very average goose, with a few bites that almost pushed it into the below-average territory. It was a rather tough and microwaved bird’s leg, with less-than-crunchy skin, but more meat that some of the better geese I ate this year. On the disgusting side, a couple of times I found the meat to be attached to the bones by some very strange fat, which extended like rubber when I pulled the meat with my fork.

The red cabbage tasted totally industrial: almost inedible alone, but quite OK when combined with the goose meat. Surprisingly, the potato dumpling turned out to be the best of all I tried this year: a bit dry, but not sticky and with some taste.

What I don’t understand is how the area around the Lake Neusiedl, which is home to thousands and thousands of geese, can be so poor when it comes to cooking them. I must be visiting very wrong places. But after Katamaran’s experience, I am not sure whether I want to make another experiment next year or simply return to the Römerzeche.