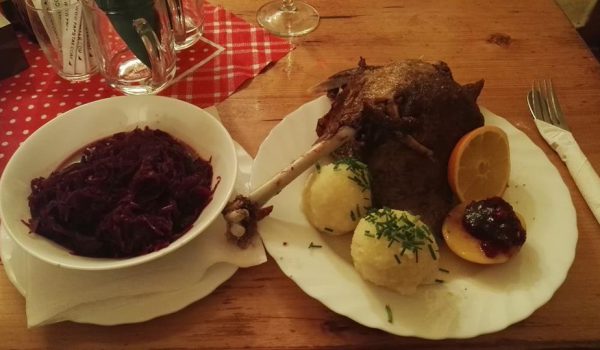 “Goose till the end of December – upon pre-order,” said the Schreiberhaus’s entry on the Austrian Localtipp restaurant search site. “Cannot be,” I told myself – not because it’s rare to find a goose in mid-December, but because a tourist location like this simply cannot afford serving anything pre-ordered. They must be making most of their money from the people brought to them in tourist buses; what pre-orders are we talking about? So I simply walked in on a late Sunday evening and became the fifth or the sixth person in the entire restaurant, the waitresses included.

Crunchy skin? Forget it. I was hard-pressed even to separate the skin from the meat; both were glued together into some sort of a gray fat mess. Deeper inside, some meat appeared, of even darker color, totally lacking salt and having an unpleasant fiber-y texture. Tasty red cabbage? Yes, if you absolutely love cinnamon, because that’s the only taste it had. A lukewarm cinnamon, to be exact, because they took the cabbage out of the microwave a few minutes too early. Startlingly delicious dumpling? Stop kidding, it was a ghastly sticky thing.

The sad thing is, there was something very pleasant about the quiet atmosphere of the tourist-free Schreiberhaus, with the first snow of the season visible through the window. Had I ordered something different, or simply stayed with their cheap but not-too-bad wine, I would have certainly enjoyed it much more.