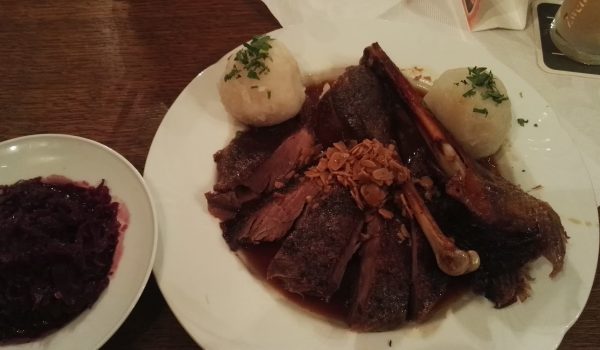 There is only one thing more difficult than having a goose on two consecutive days: it’s to have two geese on the same day. And even though I have experienced the latter in earlier days, now even the former requires some effort and commitment. Especially when combined with a heavy lunch a few hours earlier. It must be my age.

On the other hand, I had no choice. The menu of Selitsch, that super-Austrian heavy-food Beisl close to my home, said quite clearly that the goose-feast would be over at the end of November. On December the 1st, new specialties will be served. And it has been my old desire to try one of the two Selitsch’s exclusive geese: a pepper goose or a garlic goose, also called the Yiddish goose.

Disappointingly (though somehow predictably), the only “garlic” thing about the Yiddish goose is the presence of a huge number of garlic slices in the sauce. The cook could have added bananas and called it a banana goose with the same effect. The question is, does the garlic add anything to the taste? It adds garlic taste, obviously. Judging by the fact that when I finished the dish, the only things left on the plate were the bones and the garlic slices, garlic and goose do not work very well together. At least for me and in such a combination.

Garlic aside, the goose was big, as expected from Selitsch: two legs and pre-cut slices of the breast. The slices were OK, especially with the red cabbage (which was average but better than no cabbage at all), though the non-crunchiness of the goose skin was worrying. The legs, however, which I left for the end naively thinking they would be the best part, were awful. It was simply very tough meat with the taste of something well past the expiration date. The dumpling is best left unmentioned – just refer to the corresponding rating below.

I remember seeing a couple of articles that mentioned Selitsch as one of the best Martinigansl places in Vienna. Knowing this restaurant, it’s easy to believe that the goose could be good. Perhaps it even is, if you visit early in November and take the “classic” version. On the last day of the season it’s best left to retire to the garbage bin.