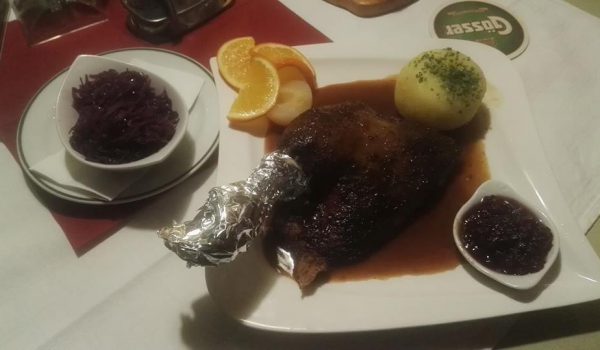 I don’t trust XXL restaurants. No dish can be at the same time large, good and cheap. XXL restaurants concentrate on the “large” and “cheap” sides of things, so the quality must inevitably suffer. On the other hand, having a tiny yoghurt for breakfast and somehow forgetting to have lunch, I was hungry and the prospect of eating a less-than-perfect goose, as long as there was a lot of it, did look quite appealing.

Brünner Stadl has managed to beat all my expectations by serving me a goose that was small, too expensive for what it was and seriously bad. I must be sharing the guilt, having arrived 20 minutes past the restaurant’s kitchen closure, but whoever had put the poor bird’s leg into the microwave for me would have done exactly the same (with the same leg) the next day for some other unfortunately customer.

In fact, the most shocking part was not the goose itself, but the sauce it was swimming in. Though “swimming” is a wrong word in this case, because it implies that the sauce was liquid. It wasn’t. It was a thick sticky brown mass of an unknown origin and a plastic taste, forcing me to put cranberries on the goose meat instead, in a failed attempt to make it juicier. At least the cranberries were good; it’s generally very hard to screw up cranberries.

As for the goose, it was tough, tasteless and had bones where geese should not have them (no joke). The skin was dry on one side and badly undercooked on the other, with so much fat underneath that even a fat lover like me had to cut it off and put aside. And once the easy-to-cut meat on the outside of the leg was gone – which took about three minutes – the stuff I found deeper inside was so hard to categorize that I did not risk putting it into my mouth.

Compared to the goose, the cabbage and the potato dumpling were almost good, so I concentrated on them and the cranberries until I got bored, thanked the very nice and friendly waiter, paid, and left. Most likely, never to come back.