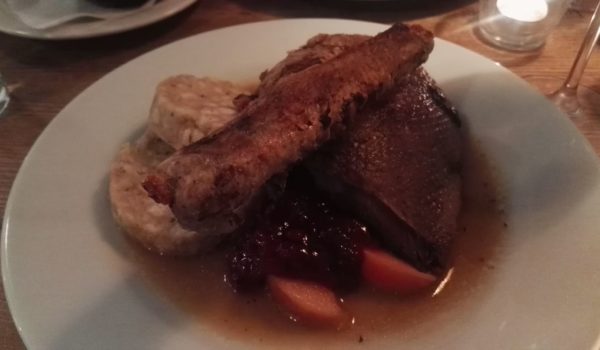 When I first saw the price of a quarter of a goose in this restaurant’s online menu, I thought it was a typo. A typical Martinigansl may cost 20 euros or 25 euros for something sophisticated. I have tried 16 euro geese, and some of them were not especially bad. However, a goose costing 33 euros has to be special. Considering that Krenek is not some super-posh restaurant but an upper-class Heuriger at the end of the cellar street, the goose has to be so incredible as so shadow all the other geese of the past and the future. Walking towards the Heuriger in the icy cold wind, I was already thinking of creative ways of slamming it in my review, should it serve less than an epic goose.

As usual, the reality was more complicated. As it turned out, the goose came with a complimentary goose liver pâté as a starter, which can easily be worth 7 or 8 euros by itself. Thus, we are not talking about a madly overpriced goose, after all, just a rather expensive one. Personally, I do not quite understand the reason for this bundling decision, especially being someone not particularly fond of liver (Krenek’s pâté was excellent though). Possibly, the silly price actually makes people curious; that certainly worked for me. On the other hand, despite a pre-reservation, the wait for the goose was quite long – three quarters of an hour at least – and serving the pâté might have been a clever trick of keeping customers occupied.

Another peculiarity of this Heuriger is that its geese are obviously cooked elsewhere. At least three times during the evening, I saw the owner entering through the door and carrying metal trays with cooked geese to the tiny kitchen, where they were, most likely, heated. Nothing wrong with that: I would definitely prefer a goose freshly cooked somewhere else (as long as that place is not 200 km away) to a goose cooked in the restaurant’s own kitchen a week ago and left in a fridge.

And the goose of Krenek was fresh indeed. True, it had a very strange color – light brown – that could have pointed towards under-cooking, but the taste was perfectly fine: crispy on the outside and well-done inside, with only a bit of fat. I am just guessing, but perhaps it had been roasted under much greater heat than usual, making it thoroughly cooked without burning; only very close to the bone did the meat become too tough and difficult to separate to be worth bothering with. What the goose lacked slightly was salt, but mixing the meat with the sauce and the cabbage almost eliminated that deficiency. In terms of size, the portions appeared to have the same balancing problem as those at Schiefer Giebel: the breasts were somewhat bigger than average, while the legs were significantly smaller. Choose wisely.

It is a real pity that the white cabbage with bacon and the “Servietten” dumpling were nothing special. To the restaurant’s credit, one can choose between different types of side dishes, including a potato dumpling, red cabbage, and so on. I had a chance to try a bit of the red cabbage and can only say that it had an unusual, alcohol-heavy taste, but was still better than the deadly boring white one.

Was this goose worth its 33 Euro? Probably not, even taking the free pâté into account. Was it a bad idea to try it? No, not at all. If eating a freshly cooked bird is your cup of tea (or your leg of goose), reserving a table in Krenek is not a stupid move. It’s very popular, by the way – the small dining room was packed with people, and the noise was just below the annoying level. However, there are geese around that may not be fresh, but are tastier and cheaper. And, if you are travelling by foot, much easier to reach.