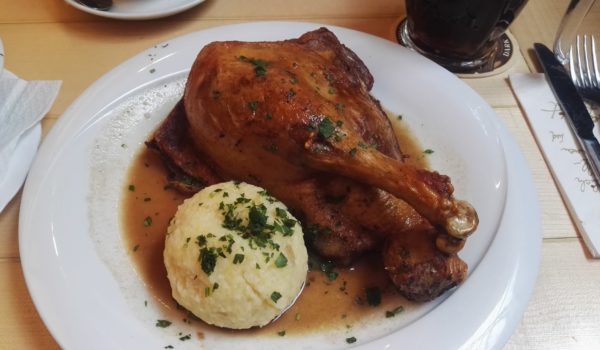 Just a few days ago, I introduced the idea of the “stop-point” – the moment when one stops eating the goose regardless of how much of it is still left. Today I had the opportunity to try a Martinigansl whose stop-point was so early that the content of the plate I returned to the waiter did not look much different from what he had brought me in the first place.

The funny thing is, I did actually eat quite a lot. The leg looked hefty, as if belonging to a goose equivalent of Schwarzenegger. Cutting the meat, I could feel the muscles: even in its post-mortem state, the bird seemed to be actively resisting being eaten. The closer I got to the bones, the harder the fight became, the meat totally refusing to separate, and eventually I gave up even though there might have still been plenty of edible stuff extractable from the bird.

The meat that I had the chance to eat was on a tough side, but tasty, containing a touch of a pleasant “burnt” taste. The skin was great when crispy and forgettable when not, and I am afraid I found a layer of fat under the skin that I did not dare eating, so unappetizing it looked. The red cabbage reminded me of the approaching festive season, as it tasted strongly of cinnamon. Unfortunately, it was also quite watery and lacked crunchiness. The potato dumpling was not bad at all, as far as dumplings go, but simply was too big to finish.

I must admit that my goose-related memories of Plutzer Bräu did not quite match today’s experience. It was a perfectly average goose (as the score below confirms), but there have already been better alternatives this season.