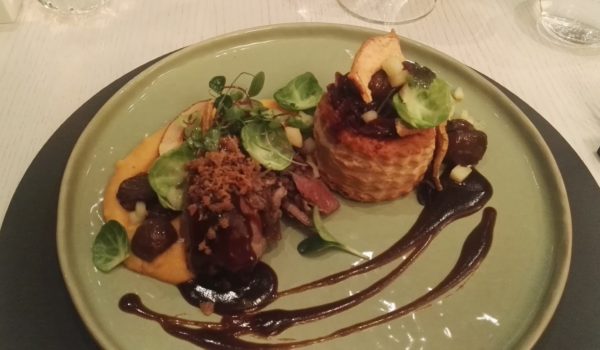 Styria, unlike Vienna, Lower Austria and Burgenland, is not a very Martinigansl area. Perhaps St. Martin is not appreciated there as much, so although I’ve seen an advertisement for a “Martini wine festival,” I am not sure at all that geese are involved.

LOISIUM, the hotel in which I have the pleasure of being lazy right now, though located in the south Styria, is frequented by people from other parts of Austria, so it is only logical that its restaurant, Weinkuchl, offers a goose-based dish.

Note that I said a “goose-based dish” and not a Martinigansl, though it was the question “Do you serve a Martinigansl?” that I posed at the reception and got an affirmative answer. Honestly, to call what I eventually ate a Martinigansl would be similar to claiming that Malevich’s famous Black Square was actually a still life. It requires imagination.

According to the dish’s description in the menu, it contained goose legs, though the absence of bones made the identification extremely difficult. The taste was certainly “goosey,” but the lack of skin made the experience somehow incomplete. The meat was also over in no time; if you cannot spot it on the picture above, it is because there really was not much of it.

The dumpling was absent altogether, which is not a huge loss as far as I am concerned, and the sweet mashed potatoes that replaced it proved to be a fully acceptable alternative. The red cabbage, in all its insufficient quantity and heavily mixed with chestnuts, was served enclosed in a sweetish Éclair pastry. Don’t ask me why; we are talking about art, and I am an ignorant moron.

As you might have guessed, Weinkuchl is a fancy restaurant, or a restaurant trying to be fancy, which is the same thing at the end of the day. Whatever the cook really tried to say remains a mystery to simple guys like me, but the taste was good.