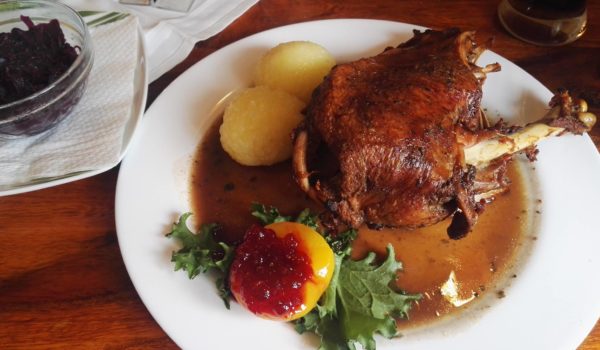 I don’t think I’ve ever waited so long for a goose. At one point (and after more than two beers) I started to doubt whether the waiter had actually understood my order, but all the people around me also appeared to wait long – except the couple who, for some unexplainable reason, had ordered fish. Then I went to the loo and had a glimpse at the kitchen: it was so tiny it was a miracle anything could be cooked in it.

Even more of a miracle was the realization that the goose – when it finally arrived – was superb. It really tasted as if it had been freshly cooked (which should be impossible, even in one hour that I had spent waiting). It even had a bit of a burnt taste. The skin was perfectly crispy, the underlying fat neither excessive nor lacking, and the meat tender but still sticking to the bones. The sauce was the goose’s own fat – not some pre-made crap – and perfectly salted.

The bird was so good that I am ready to forgive Hopfbär for the sticky potato dumplings (which, unusually for potato dumplings, actually tasted of potato) and rather plain red cabbage. At least the cowberries were present – for the first time this season.

Zum Hopfbär is a very small Heuriger-restaurant on the outskirts of the 22nd district, and having eaten a Brettljause there once, I thought of it as a very average eatery for the locals. Needless to say, after today’s visit my opinion of this place has vastly improved.