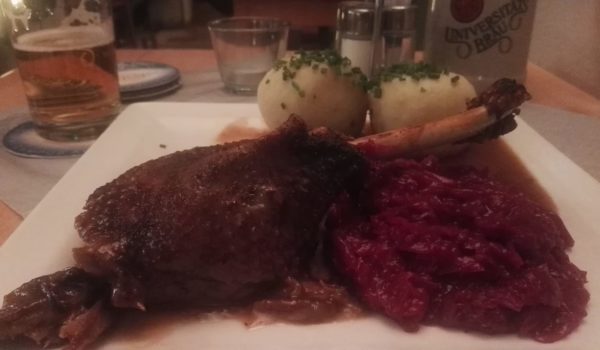 So late in November, I would not be surprised if the few restaurants still serving Gansl were actively trying to get rid of their inventory. They find the geese in the deepest, darkest corners of their freezers, sometimes wondering how on earth they got there and who has pre-cooked them (and when).

For that reason, I am not really complaining when I say that the goose of Universitätsbräu did not appear freshly cooked. With the Christmas market in full swing outside the restaurant, not even the friendliest waiter in the world would accept such a complaint. Especially since the freshness problem aside, it was not a bad Gansl. The skin was not as crispy anymore as hard because of the bird’s age, but the meat was totally edible, and the sauce, although clearly cooked separately from the goose, was tasty, not over-salted and generally improved both the goose and the dumpling. Speaking of the dumpling, in addition to being quite chewable (unlike many I’ve tried this year), it was seasoned with some green onions, which improved the taste tremendously. The red cabbage, too, was enhanced by something that could very well be some fruit, and tasted better than average.

It is hard to recommend Universitätsbräu as a Martinigansl place, or a place for any dinner, for that matter. It looks very plain inside, the chairs are uncomfortable, and the constant flow of waiters and customers past one’s table creates a rather stressful atmosphere. But the goose could have been much worse.