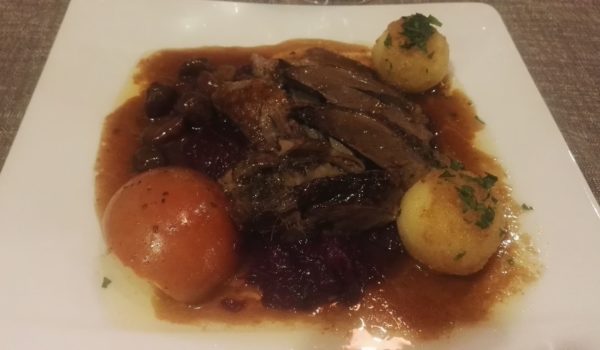 This was supposed to be the last glass of wine to finish a wine-heavy day on the South Styrian Weinstrasse and ended up being the first ever (I think) goose following a Brettljause. The Landhaus, which is partly a hotel and partly a restaurant, does not have a printed menu (at least I have not noticed one); the list of dishes is written in chalk on blackboards on wheels, which waiters push around and place strategically by the tables. The last item on the board next to my table said “Gansl,” and I do not think I could have resisted the temptation even if I hadn’t drunk more than a liter of wine earlier.

In retrospective, I should have. Styria is really not a Martinigansl country, and the Landhaus’s offering just proved that point. The dish was nothing but slices of goose meat with the bones removed, swimming in the unpleasantly-looking mixture of sauce and red cabbage with a few chestnuts and two small potato dumplings added for good measure. Nothing in the dish had any kind of memorable taste, in particular the goose itself. It looked as if the meat was removed from the bones and then somehow processed until all the “gooseness” went out of it. The worst, however, were the slices of skin, which the cook for some reason decided to leave. They were damp, uncrunchy and even slimy. And, as the final nail in the coffin of Styrian Martinigänse, at 25 euros, the dish was stupidly overpriced.

The wine was excellent, but on the famous Wine Street one would not have expected anything less.