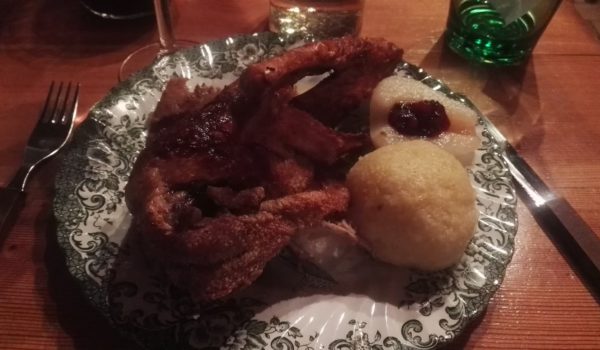 According to my theory (which I have come up with ten minutes ago in the shower but plan to develop further), every Martinigansl has a “stop-point” – the instant when one decides that the fight is over and pushes the plate away. Usually, this is the moment when the effort required to extract the remaining bits of meat from the cadaver outweighs the pleasure that eating that meat will bring. Or, sometimes, it is when there is no meat left at all, the only things remaining from the goose being its bones, fat and the weird black things that must have been the bird’s vital (but not necessarily edible) organs.

I am sure that assuming that the other parameters, like the diner’s hunger, remain the same, there is a direct relationship between the time of the stop-point and the final satisfaction the diner gets from the dish. The happier one is with the goose, the more likely one is to continue with it up to the end. I am even sure that there may be geese with the stop-points lying before one takes the first bite. Luckily, I have never seen such monsters before, though a few encounters came close.

In the case of this year’s Martinigansl of the mighty Schiefer Giebel, the stop-point seemed to lie far beyond the hypothetical “empty plate” state. Had not it looked silly, I would have happily continued to look for the tiny bits of meat and crunchy skin hidden between the bones, and then broken my teeth trying to chew the bones themselves. This has nothing to do with the goose’s size, by the way – in the past years, the portions were notoriously small, but this year, the breast I ate was absolutely comparable to what other restaurants offer. The truth is, the Martinigansl was very good. Amazingly good. If-you-only-eat-one-goose-this-season-make-it-this-one type of good. Super-crunchy, juicy, freshly cooked, with just enough fat and salt, etc. And tasting like a goose and not a sick turkey.

As in the previous years, the red cabbage was slightly on the acidic side, which may not be to everyone’s taste, but I believe the amount of vinegar put into it reduced in comparison to 2017. The potato dumpling, on the other hand, was commendable – it was a rare occasion when I could see myself eating the dumpling alone, with no sauce or cabbage added, and enjoy its taste of a real potato.

The goose in Schiefer Giebel is upon reservation only, and the opening times are painfully short, so if you want to try it, call early. If you can choose, go for a breast rather that a leg – there is more meat on it and more crunchy bits, too. If you cannot choose, simply order both.