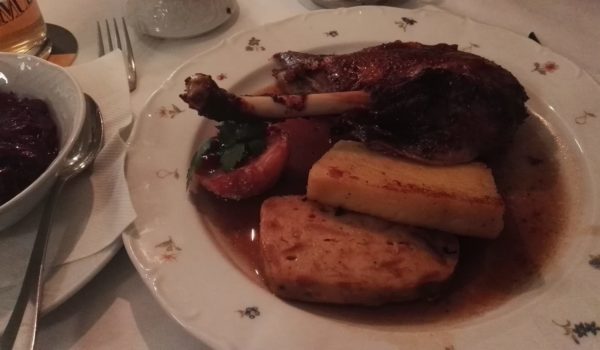 I have always wondered how magazines and web sites manage to publish articles named “Vienna’s Best Martinigansl” or alike in the middle of October. Do the journalists get a special preview of the geese before the rest of the population has a chance to try them? If not, what are these articles based on? And if there is a secret preview, then why am I not invited?

I found Gmoakeller in one of such articles, and went there more out of curiosity than because of high expectations. Whatever expectations I still had were shattered when I did not find Martinigansl on the list of dishes. I read the menu again and again, but there was nothing on it except goose soup, goose liver pâté and some creepy goose ravioli. Desperately thinking of a plan B (and unable to come up with anything except finishing my beer and politely leaving), I asked the waiter if the goose was really out, and he winked and replied, “I can make one for you.” Logically, I should have told him to leave that important task to the cook, but at that moment, I was too happy to say anything that could potentially put my dinner in danger.

As a result, I was rewarded with a goose that was actually quite good. True, it was fairly tough, but on the final day of the restaurant’s goose season (I have overheard the waiter telling that to another customer), one could not imagine anything different. Yet, the toughness aside, it was a well-cooked bird, reasonably crispy and served in a perfectly salted sauce, which was neither too watery nor too thick and, most crucially, did not taste “foreign” to the goose. The red cabbage, if one ignored a sad looking chestnut in its middle, had a delicate but interesting flavor, and the bread-based “Serviettenknödel,” which is normally served with Schweinsbraten, was incomparably better than the standard “potato sponge.” For one time, I could dip the dumpling into the sauce and actually have the sauce absorbed instead of simply make the dumpling greasy.

Well, while I am far from proclaiming Gmoakeller’s Martinigansl Vienna’s top goose, the article was not a complete lie, after all. I might even consider giving the restaurant another chance next year, but I am going to make sure to visit it at the season’s opening and not on its last day.