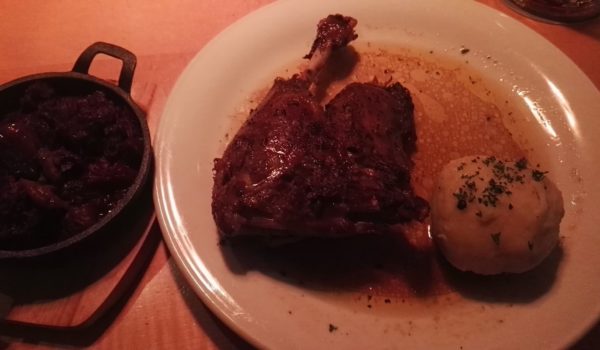 There are not so many situations when the word “fat” has a positive connotation. A “fat wallet” is one of them; a “fat goose” is another. Interestingly though, a fat goose is only good before it has been cooked. Excessive fatness after cooking is more of a deficiency. At least that is my theory.

To be fair, Figls’s goose was only slightly over-fat. Rather, it appeared oily because the fat generated during the cooking was poured all over it. As a result, the meat was anything but dry, but there is a fine line between being juicy and being wet, and this bird was just a bit on the “wet side.” Despite the relative crispiness of the skin, there were bits of fat hidden inside: the bits big enough to require removal, and such surgical work is never a welcome part of goose consumption.

The red cabbage was absolutely acceptable without any positive or negative surprises, its lack of crunchiness compensated by the presence of chestnuts. The dumpling, on the other hand, surprised by containing a tiny bit of goose meat in the middle. Whether that was a result of an accident or was the cook’s little joke will always remain a mystery.

As in the previous years, the goose liver pâté remained the best goose-related offering at Figls, and the serving was large enough that even a half of it killed a lot of my appetite. As for the Martinigansl itself, my feeling is, the quality is getting better, but at the current speed the perfect goose at Figls is still decades away.