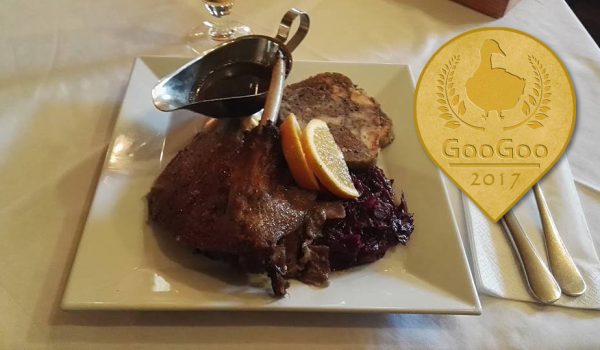 2017 was a good goose year. To tell the truth, it was a crappy year in almost every other respect, but staying within the focus of this site, I have to admit that goose-wise the year was probably the most successful in the entire decade that I have been documenting my Holy Quest for the Perfect Gansl. It also posed the greatest challenge to my stomach so far, as I managed to consume 16 portions – and that not counting another portion that I had with my family at home. It is a 60% increase over the last year and sets a new record, which is very unlikely to ever be beaten or even repeated. Four full birds devoured in a period of two months… I do not know if I should be proud or scared.

The average overall score for 2017 was 6.0 (compared to 5.5 the year before), reflecting the fact that most of the time I was enjoying better-than-average geese. Indeed, four of the locations – Gastwirtschaft Zum Ockermüller, Mariahilferbräu, Schiefer Giebel and Silberwirt – earned the very respectable score of 8 out of 10.

Schiefer Giebel’s return to form after the disappointing performance in 2016 was especially comforting. It was the only contestant this year that earned 9 points for the taste of the goose itself. As mentioned many times in the past, this Heuriger serves some of the smallest geese in the world, but the taste, while it lasts, is an absolute delight.

At the end, it lost to this year’s newcomer, Silberwirt in what was a pure points victory. When I saw the results in my spreadsheet, I actually went back and rechecked the scores but did not find any reason for changing them. Math is cold, and despite all Schiefer Giebel’s cooking magic, Silberwirt served, surprisingly, an overall better dish. Take your GooGoo (Good Goose of 2017), then.

The discovery of the year was the tiny Gastwirtschaft Zum Ockermüller in Kritzendorf in Vienna Woods. Not only did its goose finish just one point behind Schiefer Giebel’s, but Ockermüller is also a lovely, friendly and easily reachable place. It is now firmly on my radar for its Brettljause; I am looking forward to visiting it at the next convenient occasion.

The PooGoo-2017, the anti-award for the poorest goose of the season deservingly goes to XXL Brünner Stadl in Vienna’s 21st district. Although I wish I could write down some of its deficiencies to the fact that I arrived a few minutes past the kitchen’s official closure time, common sense tells me that not much would have changed had I arrived earlier. The bird had been long beyond any help.

Thank you for your attention and see you in a few days for the Brettljause awards.