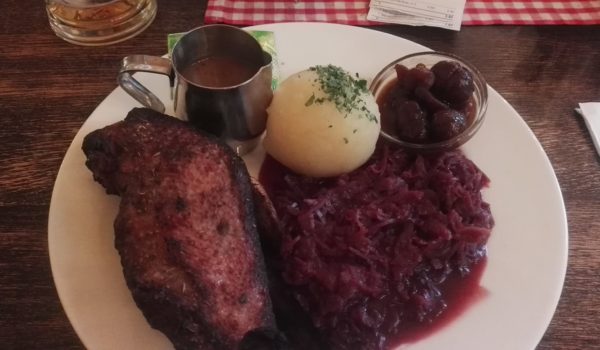 I like it when goose is served with the sauce in its own little jar. First, it proves that the restaurant has thought of the sauce – more often than not, the sauce is something that just happens naturally when the goose is put on a serving plate. Second, serving the sauce separately gives customers the choice of how much of it to use and where exactly to pour it. It is empowering the customers, as some idiot management theorists would say.

Mariahilferbräu follows the above best practice, and if you want my good advice, it would be „don’t touch the bloody sauce!“ It will ruin your goose. Really. It’s gray, thick and has nothing to do with the bird it is served with. A few drops of it are capable of turning the freshest dish into something that tastes as if it has spent months forgotten in the darkest corners of the kitchen.

The goose, on the other hand, remains nearly as good as last year. One can still order it as a half-goose for two people, though you can also go for the traditional leg-or-breast choice. The waiting time is long – do not expect to see the dish before half an hour after placing the order – but the quality of the result proves that the thirty minutes were well spent. The breast I ate this time was rich on meat, and the meat was extremely easy to detach from the bone. The removal of the bone was so efficient that one could say it was almost a very well cooked and crispy goose filet.

I felt that the red cabbage, while still totally edible, had lost some of its flavor in comparison to the last year. The potato dumpling was too spongy and sticky to my liking, and the sweet chestnuts, served in a separate tiny plate, were OK but hardly necessary. The goose, on the other hand, was the real king of the show. The stupid tourists that wander into Mariahilferbräu by mistake and order a Wiener Schnitzel do not really know what they are missing.