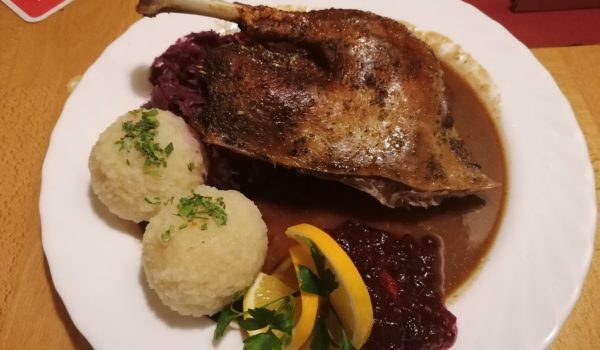 Yesterday I found a half-finished can of Pringles that was more two years old and more than one year past its expiration date. Just opening the can filled my nose with a smell that did not belong to this world. It was a smell of vinegar mixed with the dust accumulated in an old house abandoned half a century ago. I knew immediately that I would miss the chance of my life if I threw the can away without trying a chip – especially since visually the chips looked totally normal. The taste matched the smell perfectly. No potato chip should ever be allowed to taste like that; it was criminal.

I could not help thinking about that chip while eating the goose at the Bieradies. The English menu helpfully stated that this traditional Austrian dish came with “red cabbage with an apple taste.” That was not true. It was a cabbage with a strong vinegar taste, served with a dumpling with a rotten potato taste and a leg of an unpleasant little creature with a faint goose taste.

Although looking quite big, the Gansl had very little in terms of meat. The meat that was there varied from too tough to pure fat to deadly boring. Trying to combine the meat with the sauce did not help, for the sauce – whatever it originally was – ended up mixed with the vinegar from the cabbage, resulting in something extremely sour and artificial. The only ingredient I finished at the end was the cowberries, which tasted like cowberries. I guess cowberries are inherently resistant to major fuck-ups.

Almost everyone around me was speaking English, and I could not help feeling sorry for the hapless tourists, who would return to their countries proud that they have eaten a traditional Austrian dish and probably vowing never to try it again.