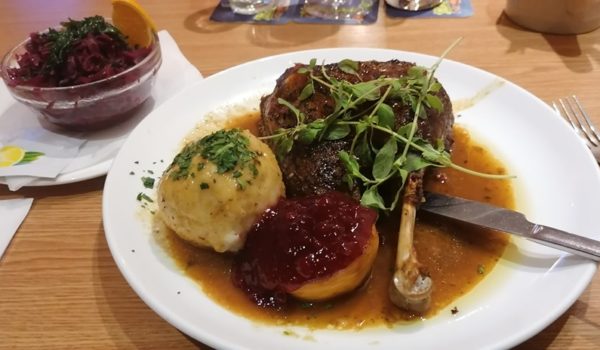 I’ve just realized I ate a goose at Pan two years ago and even gave it a good score. Strange – I could bet I tried to go there for a goose but missed the season, so I ate spare ribs instead. Apparently, I was wrong. Now I see the benefit of my site: even if no one reads it, at least it keeps track of my life better than my brain. Anyway, Pan is one of the first establishments in Vienna to put Gansl on its menu, and I would be the last person to complain.

It is quite amazing to look at the two-year old picture and realize that the presentation of the goose has not changed at all. There is again some green stuff on the top of the bird, and even the slice of orange is hanging on the edge of the cabbage plate in exactly the same fashion as before. Either the cook has not changed, or the restaurant has extremely detailed internal procedures.

A sharp knife was provided today, too. The problems started when I tried to use the knife to cut a slice of meat from the goose’s leg and failed. I tried to stick it at a different part and failed again. Finally, I attempted to cut some meat right off the bone, and although that worked, it required a substantial effort. As you can imagine, a significantly greater effort was later required by my teeth to chew the stuff. At one point, the knife became useless altogether, and I had no other choice but to take the goose in the hands and use the teeth to pull the meat off.

I really cannot understand how the goose could be so tough. The restaurant’s goose season started on the 18th, that is two days ago, and even had they cooked their geese the day before and frozen them, I doubt that three days in a refrigerator could have had such a profound effect on the meat’s quality. The only explanation I have (though I am sure it is wrong) is that Pan served me a last year’s goose that had accidentally been forgotten in the freezer.

I did enjoy the cabbage, however. It was not as overspiced as last time, and was sweet and crunchy. The potato dumpling tasted of nothing, but at least there was enough sauce and berries to beef it up a bit. Finally, the herbs on the top of the goose were present, but added only a very weak flavor. Perhaps they were last year’s, too.

Despite Pan’s friendly and efficient service, today’s experience makes it impossible for me to recommend this restaurant anymore, even if it had not been so bloody far away.