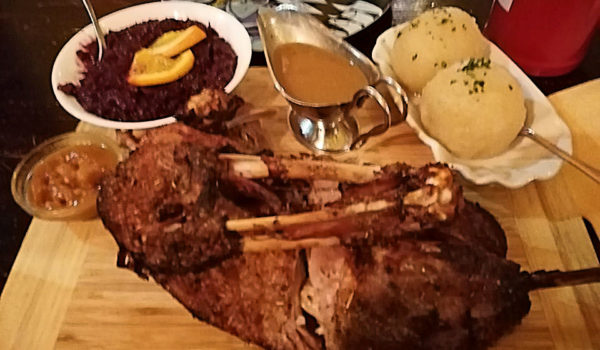 I wish one day I would be allowed to visit the Mariahilferbräu’s kitchen. It must be home to the world’s most efficient goose cooking machine. One still needs to wait for 20 minutes to half an hour between the order and the delivery of the goose to one’s table, but it is obvious that such a short time would never be sufficient to cook a fresh goose.

Yet, the bird tastes as if it was freshly cooked. Moreover, it tastes as if it was cooked over an open fire. Sometimes, while eating the goose I could distinctly recognize the smell of burnt wood. I really don’t know how they manage that, but it is brilliant.

Like in the previous years, the goose had plenty of meat, and it was perfectly prepared – neither dry nor tough, but still solid enough that it would not fall off the bones by itself. A bit of unbalance was noticeable – a few bits were oversalted while the others lacked salt slightly, and a couple of pieces contained mostly fat (a very tasty fat though) – but that unbalance was not bothersome. Quite the opposite, it introduced a touch of variety that kept the eating interesting.

The red cabbage, though not exceptional, had some spices added to it, but frankly, I did not eat much of it in the fear it would hide the wonderful taste of the meat. The only true disappointment was the dumpling: tasteless and rubbery, it was extremely annoying to chew, and I bet that had I thrown it against the wall, it would have stuck and stayed hanging.

Because of its closeness to the railway station and not-the-fanciest (to put it nicely) districts, the Mariahilferbräu was one of the last places I would have expected a good goose from, but now, after three years of surprising excellence, it has firmly established itself as one of the top goose locations in Vienna.