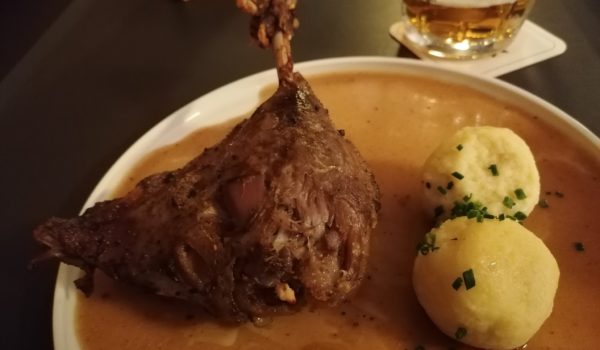 It was a late hour on a Sunday, and the goose on my plate seemed as tired as the poor cook who had to prepare it. Grayish-brown and weathered, it appeared highly unappetizing, swimming in a watery sauce that made the whole plate look unwashed.

First impressions are sometimes wrong, however, and indeed the goose tasted better than it looked, but only because it looked genuinely terrible. I always viewed geese as big tough birds, whose meat would not give up without a bit of a fight. The meat of the Gansl of Lugeck, on the other hand, seemed to detach from the bone even before I touched it with the fork. The goose had the consistency of a boiled chicken. People with no teeth would have no problem chewing it using nothing but their gums. And then I discovered the bits that were pure fat, which disgusted me even more.

Not everything was so grim, of course. Despite all odds, some of the goose’s skin was actually crispy. There was also a faint taste of black pepper in the sauce, suggesting that some thought and effort went into its preparation. The red cabbage had apples in it, which it theory should have made it stand out from the industrial cabbage used elsewhere. In practice, the apples made it worse by killing all the crunchiness and sweetening it to the extent that a more appropriate place for that side dish would have been in the desserts section of the menu.

Despite the hefty price, the portion was pitifully small, and when I finished it in something like five minutes, I felt like dining in a fast food restaurant rather than a serious centrally located tourist establishment. I had been to Lugeck multiple times, but tonight was the first time that I noticed how much like a quick eatery it looked. Small tables standing too close to each other, an open kitchen, an army of waiters running around and taking away the dishes the moment you finish them, uncomfortable lighting – everything contributed to the desire to leave as soon as possible.

What it sad is that three years ago Lugeck served me the best goose of the season. Nothing reminds of that high point now. If you are searching for a location to have a quick and light business lunch and still be able to say afterwards that you ate a Martinigansl, give it a try. But make sure that it is your business partner who pays the bill.