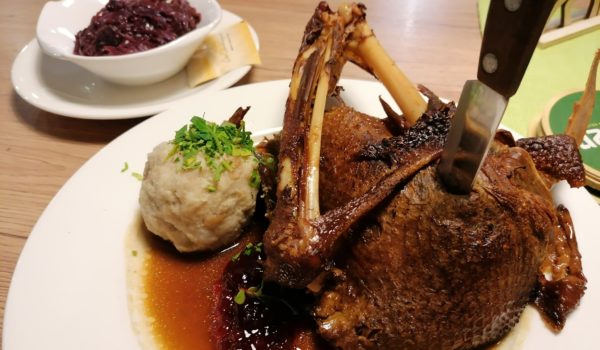 I am well aware that the phrase “old good goose,” in contrast to “good old goose” sounds awkward and is even likely to be grammatically incorrect. Yet, it perfectly conveys the message. It was a very good goose, just very old.

I am partly responsible for this disaster, of course, for I didn’t reserve in advance. Actually, I was going to the Lehner to try their Brettljause, which some people say is the best in Linz. However then I saw a goose on the menu, and considering that I planned to stay in Linz for two days more, the choice was easy. And wrong.

The waiter gave me the hint, pointing out that normally the goose is upon reservation only, but he would check with the cook anyway. (To be picky, the menu he gave me should not have listed the goose in such a case, but it did.) A minute later, he reappeared from the kitchen and gave me thumbs up, and two minutes later I had a pretty big and good looking goose wing on my table.

It tasted awful. Nobody should be forced to eat something like that. It is probably illegal to serve something like that. It was a dry aged goose — extremely dry, hard to pull from the bones, painful to chew, with the skin that could have been crispy once but dried off, and the aftertaste of death. The only reason why I kept eating the goose despite the ghastly taste was because the taste was somehow familiar. Which means, I reasoned, that whatever had that taste the last time I experienced it did not kill me. By gods, I could not remember what it was, however.

Only later, after I had left the restaurant and had been walking towards the city center trying to forget the goose, that it came back to me: the taste was reminiscent of the slice of bacon that I had bought at a farmer’s stand at a Christmas market once and then kept in a fridge for a few months. I remember that after the first bite I sent it straight into the garbage bin. I sincerely hope that a garbage bin was not the place where the cook had pulled my goose from before microwaving it.

It may sound strange, but I would nevertheless recommend that given a chance, you call the Lehner, reserve a goose and try it. I am almost certain it will be great. The goose I ate had all the attributes of a goose that had been great once. A very very long time ago.

By the way, the day after I visited the Lehner again to try the Brettljause. The waitress told me it was not available. I did not insist.