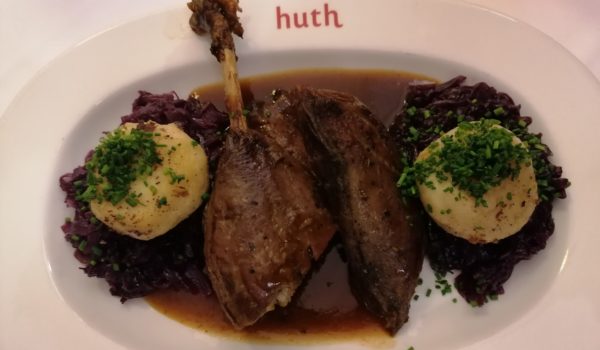 Huth Gastronomie does not make a secret of the fact that it operates five restaurants in the first district. Three of them – Gastwirtschaft, Da Max and Da Moritz – even have “Huth” in the names (“Huth Würstelstand” and “Huth Kebap” are unconfirmed but may be coming soon). They serve everything from Austrian food to pasta to steaks and burgers.

Cynics will say that there is no way a single company can be good in managing so different types of restaurants. I say, I don’t give a damn as long as at least one of the restaurants serves a good goose. In Huth’s case, the goose is the specialty of the Huth Gastwirtschaft, the establishment aimed squarely at the tourists looking for authentic Austrian food. Indeed, I shared the room with a lot of tourists, a couple of Austrians, and a large group of multinational musicians obviously relaxing after a classic performance, their instruments carefully stacked in the corner of the room behind my table.

The first bad impression created by the noise and the number of people was quickly replaced by the surprising satisfaction when the waiter brought me a couvert in the form of a plate of bread slices and a huge glass jar of sausage spread. By the time I finished it, my hunger was gone, and I was seriously worried that I would not be able to handle the goose.

I was wrong, of course. The goose, featured as a leg and a thick slice of a breast, did not look intimidating at all. In fact, it was quite nicely presented on an oblong plate with a serving of red cabbage and a potato dumpling on each end. I loved the red cabbage at the first bite: it was well seasoned and crunchier than any cabbage I had eaten this season so far. The dumpling did not suffer from “stickiness” (a common flaw of potato dumplings) and even had a faint taste of a potato – perfectly edible.

The goose was okay, but not more than that. The lack of crispy skin was the first disappointment. Worse still, whatever efforts the cook had spent on making the meat tender backfired badly. The bird had lost all it normal consistency, and chewing it for a mere couple of seconds transformed the meat into something like sand with a goose taste. Well, I am not even sure that the taste was goose’s; it could have as well come from a duck.

It was a pity really, because overall the experience turned out better than expected. Had the restaurant spent less time manipulating the goose’s texture and instead thought of making the dish slightly different (like by serving it with two types of cabbage and two different dumplings, for a change), it would have ended up with a goose worth coming back to.