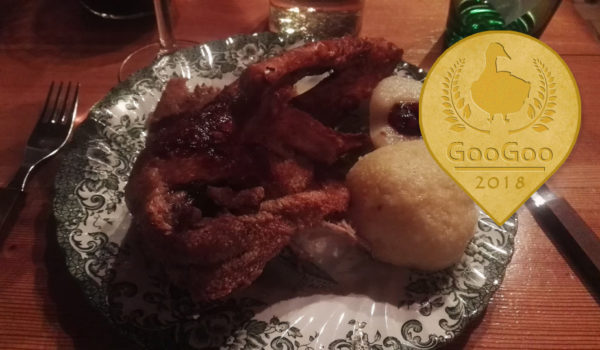 At this time a year ago I stated that 2017’s record of 16 portions of goose would never be beaten or even repeated. I was wrong. This year’s 19 portions (a 19% increase) set a new record and, as some people say, bring me on the verge of becoming a half-goose myself.

The average overall score turned out a bit lower than in the previous year (5.7 compared to 6.0), but generally there were no particularly disastrous geese. The only two birds scoring less than the average were those of Waldviertlerhof in Vienna’s 5th district and Ratscher Landhaus in the Southern Styria. The boneless beast of Ratsch was marginally more disgusting, however, and thus earns this year’s PooGoo (“poor goose”) anti-award. Some may argue that Styria does not have a Martinigansl culture, but as far as I am concerned, if one does not know how to cook a goose, one simply should not do it.

On the other end of the spectrum, Schiefer Giebel has finally reestablished itself as the king of geese. While the Heuriger is still suffering from the smallish goose syndrome, especially if one is unlucky to be served a leg, the breast I have got was quite sufficient and perfectly cooked. If there has ever been a well-deserved GooGoo (“good goose”) award, here is the one.

The only goose that came close (though not quite) to the excellence of Schiefer Giebel’s creation was the one of the tiny restaurant called Zum Hopfbär at the outskirts of the 22nd district. Against all odds, the dish tasted fresh and was expertly cooked, making a repeat visit next year more than likely.

Unlike previous years, there has not been a Martinigansl in 2018 that I would call a major disappointment, perhaps because my expectations have never been particularly high. If I really had to make a pick though, I would choose the oversalted goose of Zwischenbrückenwirt. For an upclass restaurant to mess up an otherwise tasty bird in such a stupid way is really a shame.

As usual, Brettljause awards will be announced around the middle of January. Until then, Happy New Year and May The Goose Be With You.