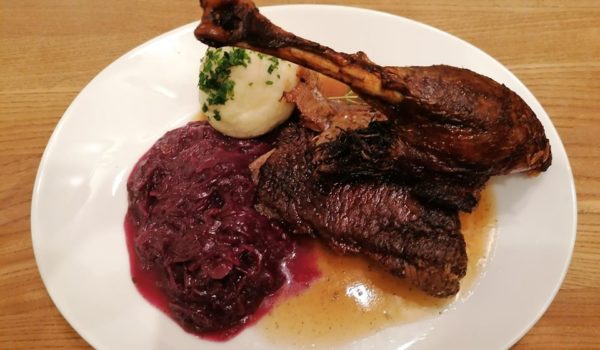 The German word “Wild” means “game,” and at least one website I read claimed that this restaurant “specialize[s] in hard-to-find game meat dishes.” Having studied Wild’s short menu for something like five minutes, I can fully confirm that statement. Game meat dishes were notoriously hard to find there. I would even go as far as to claim that the menu contained none of those. The restaurant might have as well been named after a bloke called Rupert Wild, as far as I am concerned.

The menu did list a Martinigansl, however, and I was very happy when the waiter took my order with no objections. (There is always a scary moment when you say “I would like a goose” and almost expect the waiter to ask, “Have you called to reserve one in advance?”). It took quite a while until the dish arrived, and frankly, I was quite happy about that. A goose that is delivered a minute after you order it is always suspicious.

The very first bite made it evident that the cook knew a thing or two about cooking geese. It was crispy, meaty, well salted and with just the right amount of fat underneath the skin. The meat was also tougher than average, but in a pleasant way, never taxing the teeth more than necessary. At least there was no doubt that the bird had once been a goose. A wild goose, perhaps.

The other ingredients were slightly original. The red cabbage was cooked with the Schilcher wine, and although I would have never guessed that fact had it not been mentioned in the menu, the result was a cabbage positively different from the typical industrial stuff served elsewhere. The potato dumpling had a mashed chestnut filling, which I immediately thought was a great idea. The less of a dumpling there is, the better. Unfortunately, the result was not as groundbreaking as I had expected, because the chestnuts had almost as little taste as the dumpling. Finally, the goose was served with a tiny twig of some Italian herb, which I have now spent almost a quarter of an hour trying to google. I give up, I don’t know what it was, but when mixed with the meat and the cabbage, it made a somewhat awkward but refreshingly interesting difference. I might revisit Wild next year just to find out the name of it.