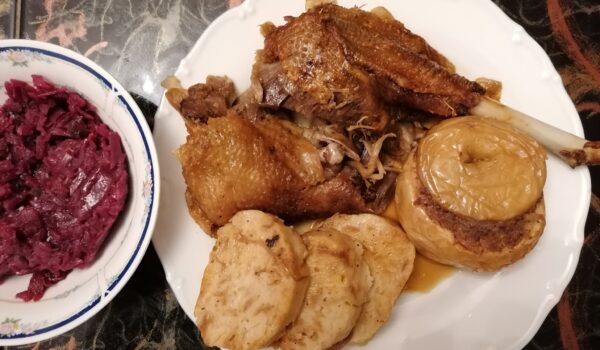 I have never had a nicer experience ordering a goose than at the Handwerk Restaurant. Its web page is easily the most straightforward, user-friendly and convenient way of reserving geese – or anything else for that matter – that I have seen. It even had a chatbot trying to engage me in a conversation, but thank you – I have enough trouble communicating with real people to waste my energy on pieces of computer code.

Picking up the order felt a bit weird, however. The restaurant is located in a hotel and because of the lockdown I had to pick up the bag with the goose from the hotel’s reception, which looked like a backdrop for a zombie apocalypse film.

The online ordering was a nice touch, but was the goose any good? The description on the web page promised the “crispiest goose of the city,” and I was really looking forward to test that claim, for I could not imagine how anyone could beat the good old Schiefer Giebel in terms of crispiness, when it cooks geese just before one’s arrival.

The goose of the Handwerk was probably cooked on the same day, but by the time I picked it up, it was almost cold. And it did not smell of goose at all. Actually it smelled mostly of the paper bag it was in. It did not even smell of anything when I unpacked it at home.

Things started to change after three minutes in the microwave. Suddenly the room filled with the scent that was unmistakably goose. And when a few minutes later I took the hot plate out to take a picture before starting my dinner, it looked really good. If I got such a good-looking and good-smelling dish at a restaurant, I would be happy.

The taste matched the look. The apple-spiced cabbage was good enough to eat on its own, the chestnut-filled apple doubled as a desert, and the napkin dumplings were a nice change from the potato dumplings that haunted all my geese this season. The goose meat felt right – slightly tough and not very juicy (the supplied sauce was insufficient, but I also blame myself for probably keeping the bird in the microwave longer than necessary), but with hardly any fat. When I finished the goose, what remained were two clean bones – a far cry from the mess of skeleton, fat, and unidentifiable bits that my previous take-away geese turned into.

The only thing, the goose was not crispy. Perhaps the skin had been crispy for a few minutes after the preparation, but in the hours since it turned into rather dry leathery substance, which was nevertheless perfectly edible. It is ironic that the main selling proposition turned out untrue. In all the other respects, the Handwerk’s goose was one of the most enjoyable this COVID-stained year.