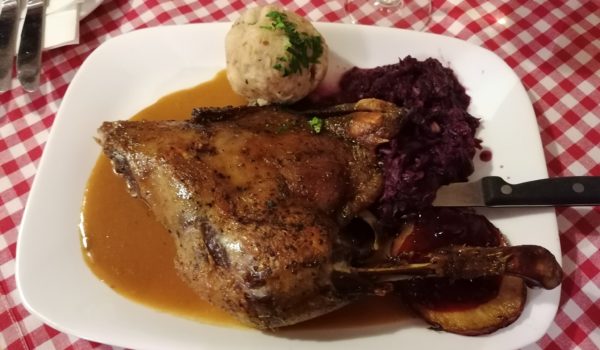 I had never eaten a goose in January before. Even today, when I noticed the line “1/4 Gansl” in the menu outside of the Waldgrill Cobenzl, I thought it was a mistake. Someone must have forgotten to replace the menu when the Martinigansl season ended back in November.

The full menu that I got inside the restaurant confirmed my suspicions. The first page with the specials listed game dishes, which is very common for December, but no goose. Thus, when I enquired the waitress about the Gansl, it was mostly to point out the mistake, for I have already decided on the alternative – a grilled sausage with a mixed salad. “Yes, we have Gansl,” the waitress replied, and in my astonishment I disregarded all common sense and ordered it.

What a mistake. The very first attempt to cut a piece of meat off the goose leg detached just a tiny slice of something dark, which tasted like a disgusting combination of old skin and fat. The following attempts fared little better: most of the time the knife simply hit the bone, while the little meat I could discover was so intent on sticking to the bones that I quickly gave up, took the bone in my hand and used my teeth to try pulling the meat off. The couple of bites that method gave me confirmed what I already knew: the goose was old, dry and flavorless. Surprisingly, in comparison the side dishes were almost fine. The red cabbage had some crispiness in it, and the bread dumpling tasted like bread (a good thing under the circumstances), so I mixed the two with the berries and got at least a bit of pleasure for my 20 euros.

Just to add insult to injury, the service was catastrophic. The staff were not unfriendly, but very slow, inattentive and totally incompetent. In a particularly cruel twist, they left the plate with the bones of the ex-goose on my table for half an hour, as if to remind me how bad it was so that I would never come back. I tell you, they succeeded.

This being the first goose so late (or should I say so early?) in the season, I was not sure whether to include it in my 2019’s or 2020’s list. Had it been counted in 2019, it would have earned the worst goose of the season anti-award. Finally, considering that the 2019’s competition is over, I’ve decided to count it as the first goose of 2020, and will not be surprised if it turns out the worst of 2020, too. An exceptionally dreadful Gansl is needed to beat this one.