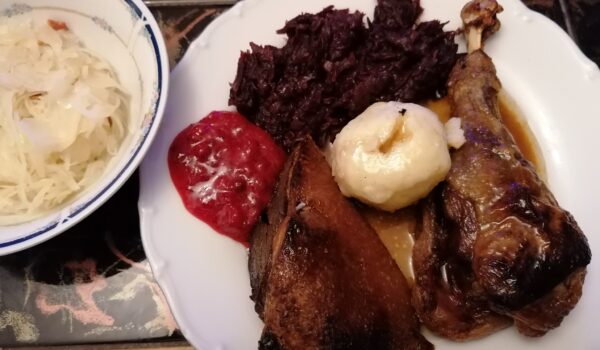 Café Ulrich looks rather sad these days. Having the reputation of a hipster place (I cannot confirm it 100%, but one evening, while having a dinner there, I realized, to my certain discomfort, that I was the only man in the entire restaurant without a beard), it is usually packed with people, especially in the evening. Today, because of the coronavirus lockdown, it was totally empty, with tables and chairs piled on top of each other, and some carton boxes lying around the room haphazardly. But it smelled amazing. It took me a few seconds to realize that the odor was coming out of a small paper bag on the bar counter, containing the goose that I had ordered earlier today. It made me doubly happy, because being able to appreciate the smell was a good indication that I had not caught COVID-19 yet.

The packaging was simple and functional. The goose (a leg and a piece of the breast), the Knödel (there was only one, which made me quite happy) and red cabbage were packed together; the same cardbox had two small containers inside – one with berries and another with “goose juice.” A separate container had some cold white cabbage salad, which I shortly thought of warning up, but fortunately decided not to. Actually, everything needed for a perfect goose was provided. Except a very small and simple ingredient: salt.

Now, I understand that the lack of salt is a problem that one can relatively easily recover from, unlike for example, too much salt. However, Ulrich’s goose was so good in all the other respects that this simple omission was particularly strange. I am quite sure it was by mistake and not by intention.

Otherwise, the goose was nearly perfect, especially as a take-away dish. The skin was crunchy and had just the right amount of fat underneath; the meat was tender, juicy and not at all sticking to the bones. In contrast, the red cabbage did not have anything special about it, though one forkful of it appeared to contain something spicy, perhaps a bit of chili. Most likely, it ended up in the cabbage by accident, but the result was surprisingly good; I wish more restaurants would experiment with making cabbage and dumplings more interesting.

Despite the salt problem, the Martinigansl from Ulrich was a positive surprise, and next year I look forward to trying it at the restaurant. If it is even better than the take-away version, it will be a sure winner.