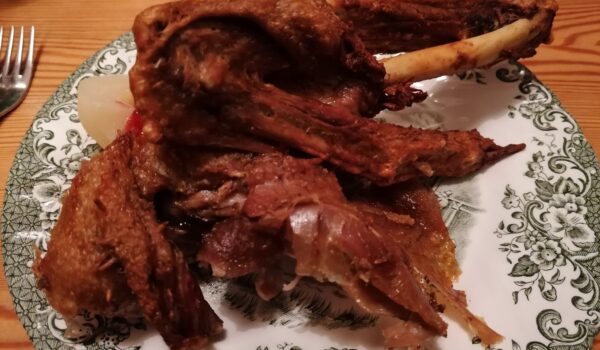 It is becoming increasingly difficult to say anything about Schiefer Giebel’s goose that has not been said before. It is the best goose in Vienna, plain and simple. Possibly in the entire Austria. Although there have been some ups and downs in the past years, in 2019 this tiny Heuriger managed to deliver the first goose ever worthy of 10 points.

This year, it managed to make it even better. The bird is still of the same fantastic quality, tasting as only a goose straight out of the oven can. Like last year, it is served on a platter, cut into several pieces, so that everyone can take as much as one wants. In comparison, however, this year’s goose is much bigger. While in 2019 one bird was enough to feed three people, today’s portion would have been sufficient for five. I hate to say it, but a leg and a couple of smaller pieces were left uneaten at the end. It still hurts me to think about that.

The red cabbage, served in a bowl of gargantuan proportions, had lost the acidity that plagued Schiefer Giebel’s cabbage for years. Even the dumpling became better: this time it tasted like mashed potatoes rolled into a ball. In fact, with a bit of fork-work, one could turn it into perfectly good mashed potatoes.

There were just two annoyances. One was the presence of tiny flies that were constantly circling over the table and periodically ending up in the wine glass. The second – which the Heuriger had no control over – was the thought of the unavoidably approaching second COVID-19 lockdown, which meant that another opportunity to taste something that good would have to wait for another year.