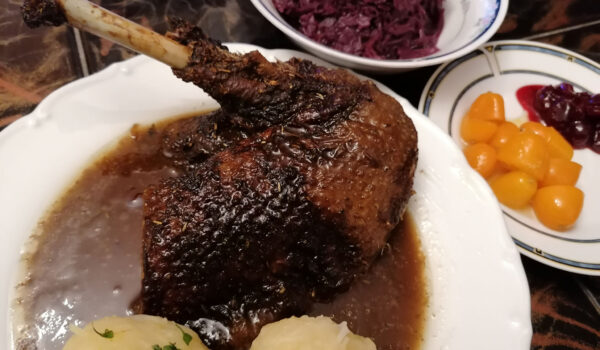 If it had not been for the COVID-19 lockdown, I would have never thought of visiting Café Amacord, even if I had somehow learned about it. The word “Café” already implies “neither goose nor Brettljause,” and for some reason I rather dislike the Naschmarkt area where this small restaurant is located. This strange year, however, Amacord was one of the several locations offering a goose-to-go, and of course, there was no way for me to miss the opportunity.

With the memories of the excellent goose of the Pfarrwirt still fresh, I could not help comparing the Amacord’s bird with that goose from the noble Döbling. In fact, the comparison made quite a lot of sense, for both dishes, although enjoyable, suffered from the same imbalance of quality. Pfarrwirt cooked a perfect goose and then screwed up the side dishes. Amacord exceled in the side dishes but served a flawed goose.

The key to the Café’s biggest mistake was salt. The goose had too much of it. Mind you, I like salt, and a crunchy goose skin with a lot of salt is one of the best things in the world. However, in this goose, the salt managed to get through the skin deep into the meat and possibly into the bone. At one point, I realized I was soaking the slices of goose in the sauce just to try making them less salty. Besides, the meat, while tender on the outside, got much tougher closer to the bone, making it difficult to cut and not particularly inviting to chew.

But as I said, the other ingredients were great. The sauce, unlike the one of the Pfarrwirt, had at least some relation to the goose. The cabbage was fresh and had a faint apple flavor. The dumpling was quite average until I found crushed sweet chestnuts in its middle, which is such a simple a brilliant idea that I wonder why no one has thought of it before. The cranberries were somehow bigger and less sweet than usual, while instead of the usual lonely slice of orange, the Amacord supplied tiny oval citrus fruits with the taste of oranges. They might have been Kumquats (I’ve just googled them), but don’t quote me on that. Finally, the packaging was excellent: each ingredient came in its one microwave-friendly container, tightly sealed and ready to be warmed up.

If you tell me that you are going to eat only one goose portion this year and ask to recommend either Pfarrwirt or Amacord, I would have real trouble deciding. If not for the stupid salt blunder, Amacord would have come out as a clear winner. On the other hand, the quality of the Pfarrwirt’s goose is highly commendable. My heart is more with the Amacord, however, not least because its offer was cheaper and better presented, and because the service was friendlier.