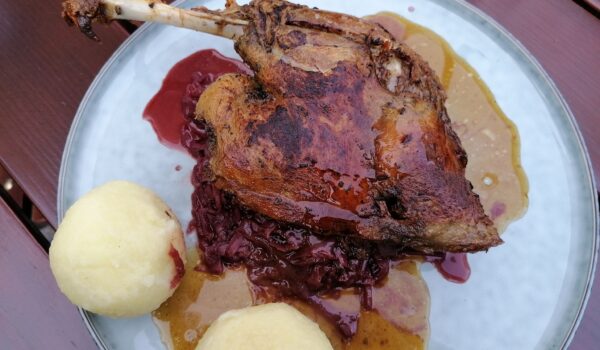 Actually, the first goose I had this season was at home. I bought a nicely packaged half-bird at a nearby supermarket and, following remarkably uncomplicated instructions, had it ready in 45 minutes. The goose had been precooked and vacuum packed, of course. That’s when I learned about “sous vide” – some sort of a slow-cooking method that helps to ensure that all the parts of the meat are thoroughly cooked.

Was the result good? Considering my extremely basic cooking skills, it was quite impressive: the meat was tender, the skin was suitably crunchy, and I did not feel sick afterwards (only very full). But the meat did not taste like goose. It was as if some marinade was applied to the poor bird, and it went all the way through, destroying all its gooseness. If I had not seen what I was eating and someone had told me it was pulled pork, I would have believed.

The reason I am saying this is that when I bit into the very first piece of Stuwer’s goose, I got a déjà vu. The taste was very similar to my cooking experiment’s output. Suddenly, I was ready to hate “sous vide.”

Fortunately, that first bite was an anomaly. The more I ate of the goose, the more I liked it. Truly, one fattish piece aside, the dish was very well cooked, without losing the meat’s juiciness and tenderness, while keeping the skin crispy and with a faint taste of burn. What also helped was the perfectly made red cabbage: sweet but not too much, and still slightly crunchy. The potato dumplings were not interesting, but since the dish came with a rather large jar of “goose juice,” cutting them into small pieces and dripping them in the juice helped get rid of both and get some enjoyment along the way.

Fortunately, the weather today was just warm enough to allow sitting outside – which I prefer, COVID or no COVID, – but the inside of the restaurant that I could see through the windows looked quite nice, modern and not at all “Beisl-ly.” The location in the “Stuwer-quarter” of the 2nd district is not fantastic, but at least it’s close to an underground station. Although Stuwer’s goose is not going to blow your mind, it is one of the better ones in Vienna.