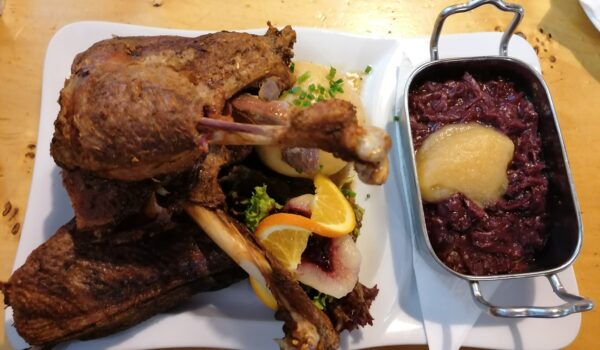 Here is a good question: how do you approach the traditional Martinigansl season when you are an XXL restaurant specializing for serving huge portions? It’s much easier with Schnitzels: you can always serve bigger ones or increase the number of them on the plate. You can also serve three or four racks of spare ribs instead of the usual one or two. But would you search the market for particularly big geese to differentiate yourself from the crowd?

The Leopoldauer Alm took the easy route of serving a half of a goose instead of the commonplace one-fourth. It’s quite an achievement, actually: until now I’ve never seen a restaurant serving a half of a goose to one person. The offer is also quite fair pricewise: although more expensive than the average goose portion, the half-bird of the Alm is still much cheaper than two portions. The leg is mostly bone, truth told, but the wing and the breast are enough for a lunch and dinner.

And that is probably the best way to handle the Leopoldauer Alm’s goose: eat as much as you can at the restaurant and take the rest home. Surely, it is not impossible to finish the entire dish in one go, especially if you are not in a hurry and not limited in the amount of alcohol you may consume, but be prepared to feel very heavy indeed afterwards.

While the size of the dish surprised me, the quality of it surprised me even more. I would lie if I said that its taste blew my mind, but it has certainly exceeded my expectations. The meat was tender and seemed relatively recently (that is, one day or less ago) cooked, and the crispy skin found here and there indicated that the cook knew his or her job. The red cabbage was totally edible – maybe not as crunchy as I would have preferred, but definitely not overcooked and not suffering from an excessive amount of vinegar. The dumpling, while not special, was not disgusting either, and I could have easily eaten more of it had I had more time.

The time was a problem, however: as a lunchtime goose, the one of the Alm was simply too big. Moreover, it was even too big to seriously consider taking some of it with me for dinner. Good if you have a goose-loving but restaurant-hating spouse at home – or at least a dog, – less good if you will have to deal with the cold goose alone. The second problem is the ambience: although quite nicely decorated, the restaurant is situated on one of the nosiest, smelliest, ugliest and generally unpleasant street of the 22nd district, and the word “Alm” (pasture) can only be applied to it as a kind of a sick joke. The clientele is mostly working class from the surrounding area or groups of elderly locals. Again, with the right (i.e. high) amount of alcohol this becomes irrelevant, but if getting pissed is not an option, consider taking this goose home. This may very well turn out cheaper and better than if you cook one yourself.