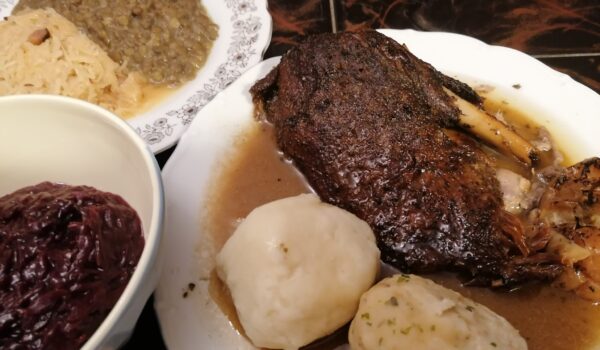 If there were an award for the number of containers a takeaway goose is packed into, Zum Alten Beisl would come out as indisputable winner. The bag I brought home contained no less than six boxes: one with the goose and an apple, one with the sauce, one with two different dumplings, one with red cabbage, one with white cabbage with bacon, and one – unexpectedly – with lentils.

As you can imagine, this created a complex logistical problem of how to warm this stuff up so that all the ingredients are sufficiently hot at the time of serving. Thanks to the magic of microwave, I managed that difficult task quite successfully, just to be faced with a nearly impossible one: how to eat the goose and all the side dishes before they get cold?

The solution required serious prioritization, and I can’t say I chose the optimal one. The lentils began to get cold first, and I hurried up to finish them. I enjoyed them a lot, and not only due to the novelty of the experience, although that played a role, too. I am convinced that the tradition of serving geese with cabbage needs a review, and lentils seem like a totally viable alternative.

While I was fighting with the lentils, the two types of cabbage started to lose the temperature, which was also a pity, because both were of good quality. The red cabbage, especially at the end, acquired a weird sour taste of berries, which I am in two minds about, but it was certainly unusual.

And I could not forget about the goose, of course, but at least it was swimming in a pool of hot sauce, which made cutting and eating it messy, but at the same time kept it warm longer. It was a very well cooked bird, occasionally crispy, with a lot of meat and hardly any fat. In compensation, there was plenty of fat in the sauce, and I would lie if I said I was a fan of it. The goose was tender and juicy enough by itself, and the sauce, particularly in such a huge volume, made the dish taste less fresh than it actually was. The meat also had a couple of annoying sharp bones hidden inside, which threatened my teeth when I bit on them, and one of which accidentally went down my throat (at the time of this writing, it has not killed me yet).

Judging by the taste, I doubt that the Beisl served me a “happy organic goose” like a few other restaurants, but I can’t complain: what the cook managed to accomplish with the goose he or she had deserves respect. The portion was big, the price was absolutely reasonable, and if I feel completely exhausted after preparing and eating it, it is probably my problem. It can also have something to do with the fact that this goose was my twentieth in less than two months.