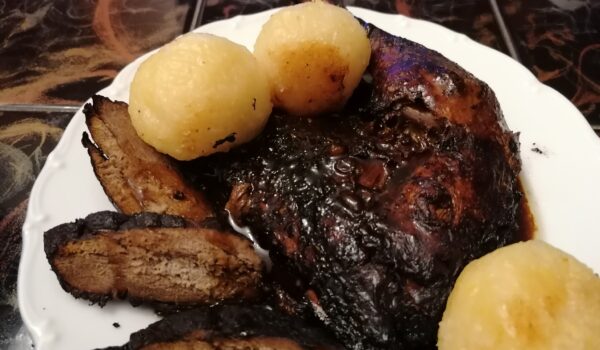 Year after year I passed by the Weingut Schilling during the Martinigansl season, on my way to Bisamberg (a hill that is not bad for an occasional short hike if one has no better ideas), thinking that I should try goose there. The problem was that this Weingut offered the goose upon pre-order only, and I simply could not be bothered. During the lockdown, however, either you pre-order or you stay without a goose, so I decided to fulfil my old wish, called the Schilling two days ago, and today went to pick up the goose, fifteen minutes before the restaurant’s closure. An empty bag with my name on it was already waiting on the counter.

“You are our last customer, so you are getting an extra dumpling,” the friendly lady told me, while filling the bag with a polystyrene box containing the goose, a carton cup with the red cabbage and a glass jar that must have held jam once but now contained thick brown sauce.

I did not get the meaning then, thinking that she meant my late time of arrival. The realization came later, when looking at the Weingut’s online menu for the following week. The goose was not listed anymore. I took the very last Gansl of the season.

And to tell the truth, it did taste like the last goose of the season. For some reason it turned out very dry; even the three slices of meat, served separately from the leg, tasted as if they had been cooked a few days before, which was of course totally impossible. The leg, on the other hand, was mostly skin and bone; I could find a bit of tender meat deep inside, but most of the time I was crunching on something dark and unidentifiable, and very seldom enjoyable.

Perhaps I kept the goose in the oven too long, but I doubt it – after all, it was by far not the first goose I had been warming up recently. I think the problem lay with the poor bird itself, or, more probably, with its owners, who forgot to feed it – on something like ten consecutive days, making it collapse and die from hunger.

The goose would have been much worse without the sauce, which was quite brilliant, having a strong flavor of wine. I enjoyed the cabbage, too, which was neither too sweet nor acidic and faintly tasted of apples. Even the potato dumplings were good; I ate all three of them and did not feel bored.

Not perfect, all in all, but at least now I can cross Weingut Schilling off my “goose list” and next time go there just for wine and some Heuriger food.