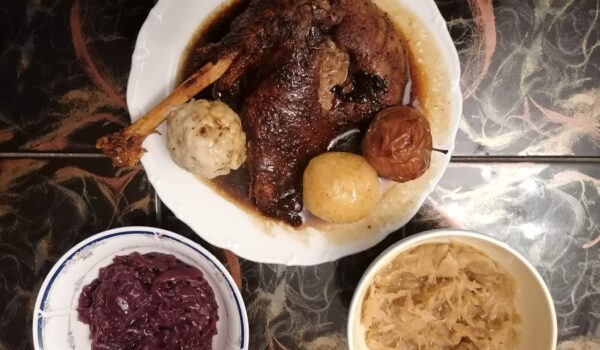 I ate a goose today. Okay, there is nothing new or interesting about that, and I would not have bothered you if the goose hadn’t been from Rudis Beisl. There are plenty of people who are convinced that the Gansl of Rudis Beisl is the best thing in the world since sliced bread. (If the sliced bread, too, comes from Rudis Beisl.) These people are normally intellectual or bohemian types, so there is little point arguing with them; they won’t listen anyway.

I had been there before – three years ago, to be exact – and liked the goose while disliking the restaurant. Maybe disliking is a wrong word; I respected that tiny eatery for what it could achieve despite its size, but staying for an hour in a small room, squeezed between the noisy regulars who all seemed to know each other, gave me a glimpse of what claustrophobia may feel like.

Funnily, I felt the same today when picking up my goose-to-go, even though the only people present were the girl behind the counter and an old man cuddling a shot of schnapps and furiously hitting the screen of his mobile phone with a shaking finger. It can be, he was waiting for his order (otherwise he was breaking the COVID-19 regulations), but by the look of him, he lived there. More people walked in later – all regulars and not all wearing masks, and I was starting to seriously consider waiting outside.

The goose arrived pretty quickly though, well packed in five separate containers: the goose, the juice, the dumplings (both bread and potato ones), the red cabbage and the white cabbage. For some reason, it was the cabbage that smelled stronger than anything on my way back.

No printed instructions for warming up the stuff were included in the bag, but there was a sheet on display in the restaurant, and thus I knew that in addition to using the oven for the goose and the microwave for the juice and the cabbages I had to boil the dumplings. That was the most confusing part, because after throwing them into boiling salty water I had to wait until they floated up to the surface. Well, they totally refused to do that. At some point, I understood that the only time the stupid dumplings would appear above the water is when most of the water evaporates from the pot. So I took them out. I seriously doubt their taste would have been different had I left them boiling for longer, however. They hardly had any taste.

As for the rest, my dear Diary, I would spare your pages for something more interesting next time, and simply say that it was exactly the same as three years ago. On the one hand, such consistency is commendable, and I was pleasantly surprised that the take-away goose did not differ from the restaurant-served one, proving that it had been freshly cooked. On the other hand, thanks to COVID-19, I have eaten so many fresh take-away geese this season, that I can make comparisons and must confess that Rudi’s goose, however meaty and crunchy, was not on par with quite a few others. It started well, but having not much flavor (and seriously lacking salt) got boring very quickly. I was quite happy when it was over and did not bother finishing the cabbage and the dumplings.

I think I deserve a break from geese now. Bye, Diary, talk to you in a couple of days.