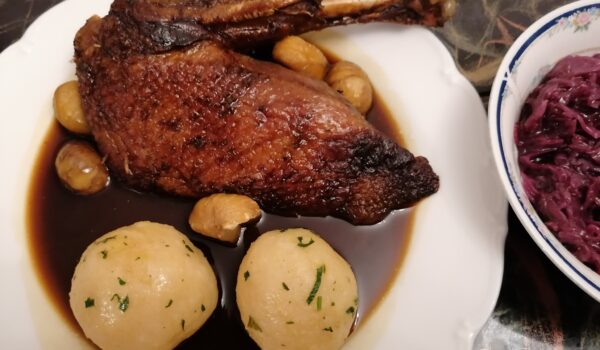 As far as I am concerned, Pfarrwirt, the oldest restaurant in Vienna, targets two groups of customers: Beethoven-loving tourists and Austrians who are nearly as old as itself. Under normal circumstances, I would not think of visiting it for another 30 years or so, but difficult times demand difficult decisions, and the Praffwirt happened to be one of several restaurants offering a goose-to-go.

The packaging alone justified the above-average price. The bag contained two well-sealed boxes, one containing a goose leg and the other with the red cabbage and two potato dumplings, and a tightly screwed glass with dark brown sauce. Somehow, that sauce impressed me the most. A few other restaurants supplied “goose juice” together with their geese, but none of the liquids had such a dark color or came in such a nice glass jar.

There was almost too much of the sauce. When I poured the entire content of the jar over the plate, it filled nearly to the rim; even carrying it from the kitchen to the dining room’s table became quite a challenge. The side effect of the abundance of the sauce was that I could only taste a few small pieces of the goose meat that were not completely soaked in it.

And that is regrettable, because the sauce, for all its fine wine-spiced taste, did not match the goose well. It would have fared better with venison, perhaps, or a pork steak, but with this particular goose, it added the flavors that were quite unnecessary. What is worse, the goose itself was fantastic, cooked to perfection and tasting as one would expect goose to taste. The portion may not look big on the picture, but imagine that the only inedible part was the single bone; the rest was juicy and lean meat.

Unfortunately, it seems that having created a nearly perfect goose, the cook decided to do everything in his powers to spoil it. The sauce was just the beginning. The red cabbage surprised by its bitterness, the dumplings tasted like the papier-mâché box they came in, and even the sweet chestnuts were more annoying than welcome.

Thus, if you want my advice, order from the Pfarrwirt, pick up your nicely packed take-away Gansl and when no one is watching, get rid of everything except the box with the goose.