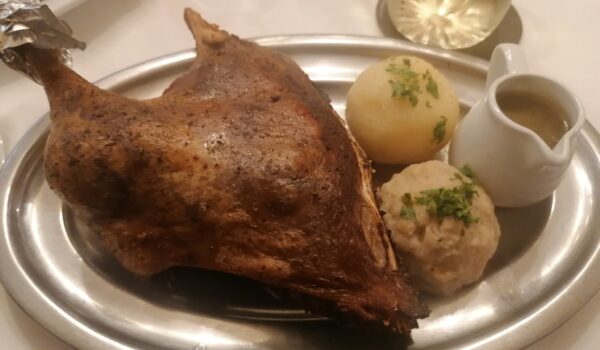 Every year in late October I surf the Internet looking for the Martinigansl restaurant recommendations that various magazines customarily publish. While doing so, I fully recognize the foolishness of that endeavor, because on the date of the publication, most of the listed restaurants have not even started serving geese, and I doubt very much that journalists receive an “advance portion.” In the best case, these recommendations are based on the experiences of the year before; in the worst case, they are based on the advertisement money that the magazines receive. I prefer to believe in the former.

It must be said, the list of the recommendations hardly changes from year to year. A few names, such as Rudi’s, Reznicek, Amon and Meixner, are always there, and over the years I have tried the geese of all of them, with varying experiences. One of the names that is nearly always cited as a premium location for a goose, Weinhaus Arlt, has, however, avoided my attention so far.

Today I made an on the spot decision to visit it, without any reservation, and to my own surprise, found a table. I am sure that closer to St. Martin’s day, a reservation is a must, for even today, very early in the goose season, this small restaurant was almost full with people, most of them looking like self-styled artistic types who appreciate organic food.

The goose of Arlt is indeed a “Bio-Weidegans,” and as such is noticeably more expensive than the geese who were less lucky in their lives. As I arrived, four people at the nearby table were busy fighting with a carcass of one of the birds, and the mere fact that the restaurant could serve a whole goose if asked, made me confident that what I would receive cannot be bad.

As my portion arrived, and I cut into the goose leg’s skin with a slightly inappropriate butter knife, my heart rejoiced: the skin was crunchy! It did not rejoice long, though, because a few moments later the knife hit a bone. I spent the next few minutes approaching the leg from different sides trying to find the hidden cache of meat, but with not much success: possibly due to its happy months in the pastures, the goose did not develop much meat. What I discovered was mostly crunchy skin, crunchy fat and bones.

The scarce meat that I could find tasted good but stuck to the bones and had a rather fiber-y texture. It was much easier to eat using hands than with a fork and a knife, the fact that must have been well-known to the restaurant, which provided a wet wipe to clean the hands. The meat lacked salt somewhat, but enough salt was contained in the sauce, which was basically the fat that dripped off the goose during the preparation.

At one slightly disturbing moment during my search for meat among the bones, I came across yellowish cubes of something unidentifiable. I risked to try them, and realized they were localized goose fat that somehow survived the cooking. They were not as disgusting as it might sound, but welcome were they neither.

I liked the cabbage and the dumplings. The cabbage did not overdo with cinnamon and reminded me of the one I tasted two days ago at Herbeck. The dumplings were of two types, potato and bread, and the potato one was by far the better thanks to some herbs added to it.

While I do see why people like Arlt – the restaurant indeed has a special atmosphere, and the service is both friendly and efficient – I could not help feeling slightly cheated with the amount of goose I received. Had the dish cost 35 euros instead of 30 but contained more than skin and bones, I would have left much happier. As far as I am concerned, organic and small do not have to be synonyms.