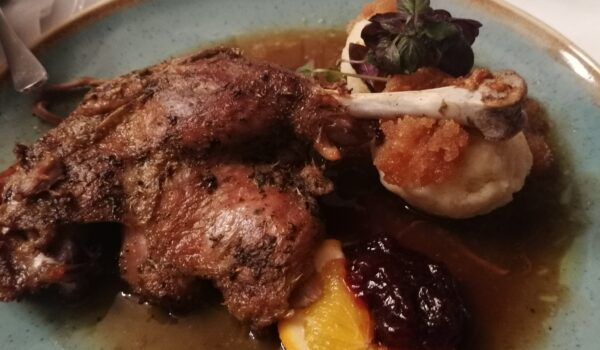 I don’t remember when I liked a Knödel the last time. I am not talking about mega-sweet dessert dumplings with sticky jam fillings – those ones are hopelessly disgusting – but the plain bread or potato Knödels that are always served with geese and Schweinsbraten. I even see a point of providing them with Schweinsbraten: they absorb the sauce and the juice from the Sauerkraut, which would be hard to get rid of otherwise. On the other hand, in the case of a goose, Knödels are generally little more than extra weight. Normally I rate them so low that I was actually considering changing the rating scale for them: from 10 for boringly tasteless to 0 for unspeakably repulsive.

Herbeck astonished me today by serving a potato dumpling that was not only edible, but even enjoyable. A part of the secret must have been in the breadcrumbs and butter that the cook added to the dumplings – something no other restaurant I know has tried before – but the taste of potatoes was also unmistakable, a far cry from the bland, hard-to-identify flavors that most Knödels suffer from.

The goose itself did not disappoint either. The only criticism I could think of was the lack of a crunchy skin, but if the price of crunchiness were drier meat, my preference would fully be on the side of the tender, yet neither under- nor overdone meat that Herbeck had achieved through expert cooking. It also managed to come up with a sauce that was not purely goose’s fat, yet tasted as if belonged to the goose since, well, the goose’s childhood. It matched it perfectly and, together with the supplied sweet chestnuts, enhanced the bird’s taste.

While the fact that the goose skin was not crispy could easily be forgiven, the red cabbage would have, in my opinion, benefitted from a bit more crispiness and a bit less cinnamon. I did enjoy, however, the warm feeling that eating the cabbage spread in my mouth. Whether that was due to added alcohol or some spice, I don’t know, but it was pleasant.

Even the best goose can be spoiled by a stressy or noisy atmosphere, but also in this respect Herbeck was great, even though all its tables were occupied. Either I was incredibly lucky by having very considerate neighbors, or the wide spaces and high ceilings of the restaurant could successfully absorb noise, but it felt quiet; the conversations at the other tables sounded like murmurs and did not annoy a minute.

After a couple of disappointments I have already had this year, Herbeck is a great new discovery and is totally recommendable.