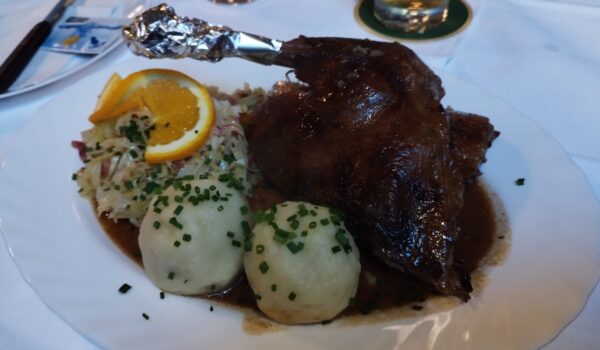 The word “Beisl,” which denotes a traditional Viennese establishment with down-to-earth kitchen, is often misused these days. There are “modern” and “innovative” Beisls popping up here and there, serving everything from sushi to vegan food. In this respect, D’Landsknecht is a Beisl in the original sense: somewhat cramped rooms, dark-painted wood paneling, and the feeling of permanent smoke inside, although smoking in restaurants has been illegal since a long time already. D’Landsknecht is anything but modern: I remember drinking beer there 30 years ago, and the restaurant looked exactly the same. It probably looked the same in the 19th century.

In a real Beisl, the food should match the ambience, and therefore cannot be too fresh. While the lack of freshness is fine for goulash, Kaiserschmarren, Zwiebelrostbraten or even a schnitzel, it can come as a bit of a shock when it shows in a rather expensive portion of goose. I should have foreseen it when I placed the order, but somehow did not, the memory of the good geese of the past two days still fresh in my mind. The first surprise came when I tried to cut through the skin with a knife and immediately hit a bone. I have often heard the expression “skin and bones” to describe malnourished persons, but never thought it could apply to geese so exactly.

I could discover more meat closer to the leg, and it was not too tough, but the taste was utterly disappointing. Not only was the goose devoid of any apple or orange flavors, but the cook seemed to have forgotten even such basic seasoning as salt. I suspect the waiter was aware of that, for he brought me a number of different shakers, including one with hot chilly pepper. In desperation, I actually tried it on the goose. It did not help. While the lack of flavor can sometimes be compensated by a good sauce, in this case, the sauce made it worse. This was one of the most inappropriate sauces imaginable for a goose – inappropriate for anything except an old goulash, perhaps. It tasted of an old dusty kitchen. I know it is hard to imagine how an old dusty kitchen tastes like, but had you tried the sauce, you would have fully concurred with this comparison.

While ordering the goose was clearly a mistake, at least I made a right choice with the cabbage, ordering a warm cabbage salad instead of traditional red cabbage. The salad was crunchy and had just the right level of acidity, while the pieces of Speck in it were so tasty that they managed to improve both the goose and the dull potato dumpling.

To be fair, I have eaten worse geese than the one of D’Landsknecht. Not this year, maybe, but I have. It was not a completely hopeless bird, just a bad one, and far too expensive considering the quality and the size of the portion. On the other hand, if this is a sacrifice I need to make to help good old Beisls like D’Landsknecht survive for many decades more, so be it.