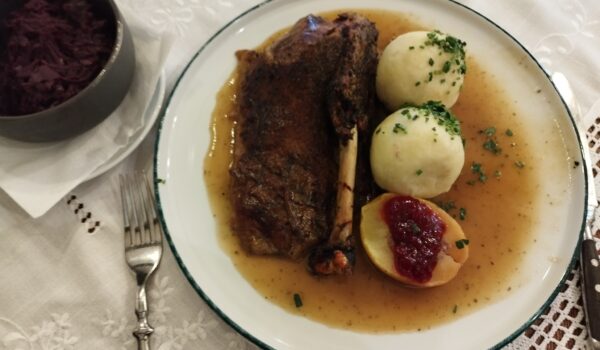 Chewing the goose at the good old Postschänke was a perfect opportunity to contemplate the meaning of average. I have been reviewing Martinigänse for almost 15 years already, yet could never come up with a proper reference for what an average goose is. Looking at the past statistics, I rated many more dishes as “above average” than “below average,” suggesting that the “average” for me is not something based on my own experience. It is rather an attempt at objectivity, which must involve making assumptions about what all the geese I did not eat might taste like. Which is very silly, of course. Neither is the average or even lower-than-average rating an indicator of whether I would return to the restaurant to retry its goose in the future. If it were, I would deprive restaurants of a second chance and eventually become out-of-date with the latest developments on the Gansl front.

It was when cutting off a particularly nasty piece of brownish-gray undercooked skin, unable to decide whether to risk putting it in my mouth or to simply leave it on the side of the plate, that a reasonable criterion of averageness came to me. Would I have ordered the same dish, had I known in advance how it would taste? If yes, it is a sign of it being at least average. If no, “below average” can be the only answer.

It was then that I resolutely removed a point from Postschänke’s goose rating, although before I was seriously considering a “5.” No, with the present knowledge I would have gone for a schnitzel or perhaps simply had a beer and walked away. Too many things were not OK with this Gansl, starting with the appearance. The portion looked weirdly flat, as if the poor bird had been driven over by a truck. The meat had a very fiber-y consistency, as if it had been glued together out of threads. I don’t know much about cooking, but to me this was a sign of boiling the goose for too long and then keeping it stored for longer than needed. I would not be surprised if it were also pre-roasted and then warmed up, because the skin was anything but crunchy. The leg was swimming in a light-brown sauce that had nothing to do with goose; I saw that sauce in many different restaurants in the past and consider it a lazy alternative to the real “goose juice” that drips off the bird while it’s being cooked.

Compared to 2021, the quality of the red cabbage went sharply down. While a year ago I praised its crispiness and cinnamon flavor, neither of them was present this time. Moreover, it had a strange aftertaste of something that does not normally belong in cabbage. Only the chestnut-filled apple with cranberries was still great, but let’s face it, it was not worth the price of the dish.

I sincerely hope that today’s goose was Postschänke’s one-time fuck-up, because I really like the place. Its interior is cozy, the service is very attentive, and being the restaurant where I ate my first ever Martinigansl many years ago it awakens good memories. Alas, at least my experience today helped me sort out the averages question.