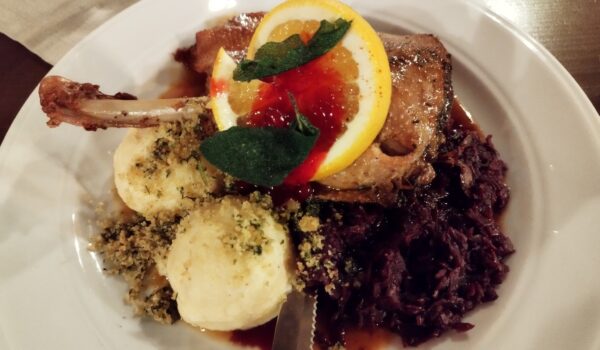 I always planned to revisit Melker Stiftskeller. As far as I can remember, I have been there twice: the first time with my family, absolutely ages ago, following someone’s not-too-creative recommendation, the second time at a farewell party of my second-level supervisor. Yet I have been passing by that mega-touristic restaurant at least twice per week, often pausing to check its menu and mainly paying attention to the Stelze, or pork knuckle, which seemed to be the restaurant’s main specialty.

The problem was, I was never hungry enough, and it is not like the Stelze had any chance of running away to prevent my postponing the visit. Things turned different when the menu listed goose, by definition a seasonal dish. It was clear that I had to take the chance or remain goose-less for another year. I chose the former, of course.

The first thing that had attracted my attention was a strange seasoning on the dumplings that accompanied the goose. It looked like finely hacked nuts mixed with something green, but its taste was unrecognizable and very boring. The second curiosity was a weirdly tough piece of red cabbage. Upon closer examination, it turned to be a leaf of some kind, looking a bit like mint but well grilled and flavorless.

The dumplings were OK (in a boring but not annoying way), but the goose meat, while abundant, was quite dry. Mind you, there are different kinds of dryness. When the meat is tough and gray, you can be sure it is dry because of staying in the cooked state for too long. When it has the taste of goose but the texture of sand, you start to wonder…

I wish a sauce was served to counterweigh the dryness of the meat. Sadly, there was none, so the only way to add some liquid to alleviate the lack of sauce was to mix the meat with the fat skin – hardly a practical workaround.

It was not a great goose – far from it – yet I hesitate blaming Stiftskeller’s staff for that. On the contrary, I think the restaurant should not be ashamed of serving an average goose like that. It is rather the tourists who should be ashamed for not doing enough research before ending up there.