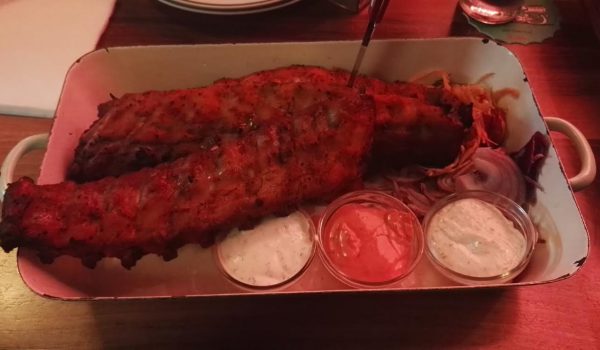 The restaurant on the top floor of the Gerngross shopping mall is one of the three belonging to the Brandauer family, and while the locations of the other two are somewhat nicer, they all share the same menu. The spare ribs are indicated as one of the specialties, and it’s clear why they may be popular among a certain group of people: the portions are huge and not expensive.

Served in a metal bowl that would look more appropriate in a bathroom than in a kitchen, the ribs came as three long racks, with three sauces and a spicy cabbage salad. The first few bites were disappointing: the meat had a strange smoked taste, somewhat similar to the Austrian dish of Geselchtes. However, by dipping the meat in different sauces and spicing it with the cabbage, one gets into the routine, as after a while the taste becomes acceptable. Unfortunately, the sauces were too plain and liquid for my liking: a garlicky one (but not too garlicky), a herby one (with hardly any herb taste) and a standard pink peppery one.

After two racks I got very full and bored. The idea to ask the waiter to wrap the remaining rack to take it home did not cross my mind. Actually, I would be quite happy not to eat spare ribs for a month or two now.