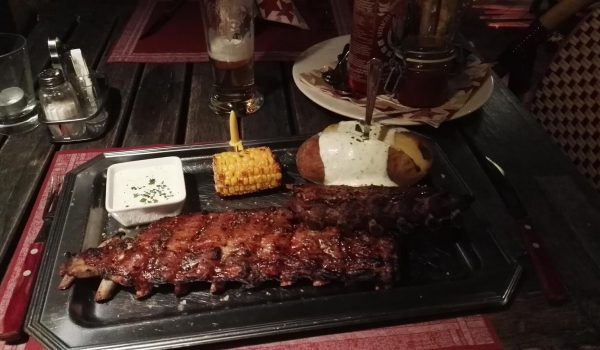 This steak/burger/Mexican grill restaurant in the center of Innsbruck looks quite unattractive and touristic from the outside but is actually quite impressive once you enter. It’s huge, spanning over two floors (at least) and several rooms and really nicely decorated: apart from the few tables at the entrance that are squeezed together in a most stupid way, deeper inside each table provides plenty of comfort and privacy.

At 18 Euro, their ribs are expensive, but look worth it: arriving on a metal plate, they come with a grilled corn on the cob, a huge baked potato and a light herb sauce. The other sauces are delivered on a separate plate: there are two jars with homemade sauces, a bottle of Chinese “super hot” sauce and industrial tubes with mayonnaise and ketchup.

The ribs themselves came as two racks, one smaller than the other. Strangely, their taste was totally different. The bigger rack had not very tasty but very tender meat, resembling pulled pork. The smaller rack, on the other hand, had a typical unmarinated “piggy” taste of Austrian spare ribs, which are so easy to find anywhere. Without the sauces, the only special thing about the ribs would have been the fact that they were covered with black pepper (not a bad idea, but still not a replacement for a proper marinade). The sauces, however – and the really well cooked potato – have made the dish for me. If you want my advice, stay away from the Chinese sauce; it’s far too strong and kills the taste of everything. The homemade sauces are superb, on the over hand. Stay away from the beer, too – it’s really not special, unlike the rather expensive Italian and Argentinian wines that I thoroughly enjoyed.

If I were to stay in Innsbruck for 3 or 4 days more, I can see myself visiting Flo Jos a couple of times at least – to try their steaks and burgers and take advantage of their free wi-fi. It seems to be much better than the other tourist offerings nearby.

Update from 2016-12-26:  The burgers are tasteless, unfortunately, and not at all cooked “medium” as was requested. They come with exactly the same sauces as the spare ribs, though, so one can choose any taste one wants.