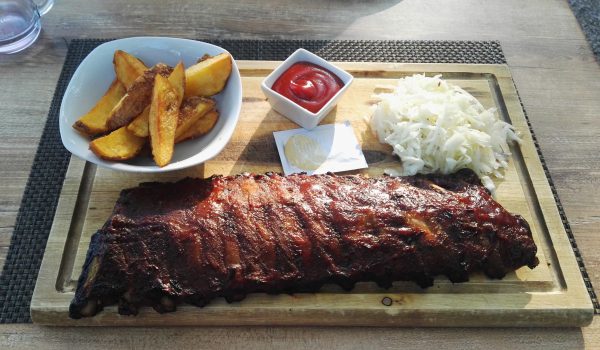 I am sure there are people who fly to Vienna late in the evening, stop at InterContinental, have some short but important meeting the next morning, and then end up with an hour or two of spare time before catching the cab back to the airport. Unless the meeting was followed by a host-paid business lunch, chances are, the hungry businesspersons would like to taste a bit of Viennese cuisine at an authentic establishment. Enter the Biergart’l, a place that looks like a cozy beer garden, located next to the famous golden Johann Strauss’s statue in Vienna’s city park.

It’s not cozy, actually. It’s quite characterless, overly touristic, boring beer-wise and very average food-wise. It’s also 20-30% more expensive than it should be.

But its spare ribs are OK and even better than average. Only one rack of them was served, creating a rather underwhelming first impression, but the meat was tender and easily removable from the bone, and there was a trace of marinade, resulting in a slightly smoked taste. Although obviously not grilled fresh, the ribs were somewhat burnt, making them taste less industrial.

Baked potatoes and a cabbage salad were included as side dishes, the salad being almost as good as the one at the Ribs of Vienna or the Strandcafé. Instead of the sauces, however, some idiot had decided it would be sufficient to supply a small bowl of ketchup. I wonder what the reasoning behind that had been, but the result was worse than no sauce at all, as the ketchup killed the taste of a perfectly acceptable marinade.