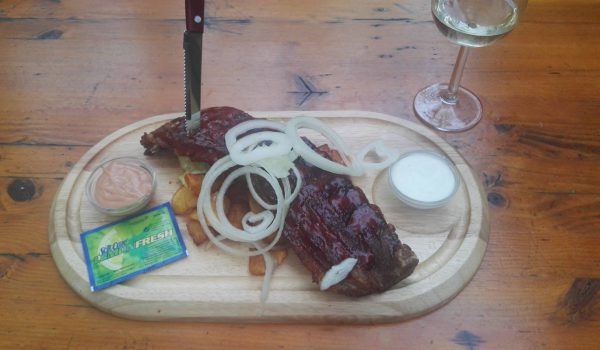 Known to me thanks to its Brettljause, Schneider-Gössl is one of those few Viennese Heurigers that no tourist will ever find. Located in the 13th district at the end of the U4 line, it can only be discovered by mistake when taking a wrong turn down from the Lainzer Tiergarten or (in my case) through serious research. There are still accordion-playing musicians here, as mandatory for a Heuriger, but instead of walking around collecting money from the foreigners, they remained seated at one of the tables, sipping their wine and seemingly playing more for their own enjoyment than for the visitors. Despite it being a Sunday evening, the winery’s small garden was almost full with the locals: largely quite old and, regardless of the age, slightly mad in that indescribable relaxed and friendly Viennese way.

Maybe because of the nice atmosphere, or perhaps because of my initially low expectations, I quite enjoyed the spare ribs. They were not in the same league as the “big players” like Ribs of Vienna or Strandcafé, but some love had definitely gone into them. The ribs showed signs of marinade, which hid the taste of pork, did not appear pre-boiled or microwaved and had a pleasant not-too-tough consistency, somewhat spoiled by the presence of tiny bones attacking my teeth on a few occasions. The ribs were supplied with roasted potatoes, fresh onion rings and a cabbage salad, which would have been very good had it been served cold. Unfortunately, by a fatal design error, the cold salad was placed under the rack, quickly turning it into an inferior warm cabbage salad. The sauces, too, left a lot to be desired, the cocktail one being too boring, and the garlic one too watery and not garlicky enough.

Nevertheless, I left full and satisfied, though happy that I settled on a small portion. Like most Heuriger food, these spare ribs are best shared with friends and mixed with other dishes. Try to eat a big portion alone and you may lose any desire to come back, which, considering how nice this little place is, would be a mistake.