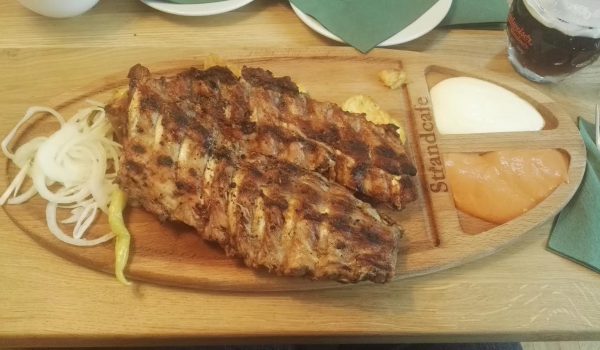 A couple of years back, reviewing spare ribs at the Strandcafé seemed sacrilegious. Finally, that was the place where I learned what spare ribs were some 26 years ago. I had bad experiences there and exceptionally good once, but there has been no other restaurant that I visited as often as Strandcafé.

However, two years ago it rather unexpectedly closed, its building demolished (no regrets there, it was a ghastly old thing), and the construction of a new restaurant dragged for ages, as the neighbors tried to block it on the grounds of noise, smell and god knows what else. After numerous delays, the new Strandcafé opened two days ago, and today I was back to check whether the new kitchen – especially the indoor grill – has killed my old favorite.

It has not, fortunately. The ribs are slightly wider now, and more expensive, and the potatoes that come with them lack the slightly burnt taste, but the ribs taste the same: not of pork and not of any recognizable marinade, but exactly how they used to taste before, and just as difficult to separate from the bones without using hands and teeth. The white garlic and the red spicy sauces remained the same, too – the fact that warmed my heart greatly.

The only major disappointment was the “new” mixed salad, which the new team has totally screwed up. Instead of a mix of salty cabbage, potatoes and cucumbers it’s now a plate of salad leaves with a few slices of fresh tomato, cucumber and paprika mixed in. Also, it’s obvious that the waiters did not have enough time to get used to the new layout of the restaurant, as they keep on running around confused, bringing wrong dishes and taking ages to notice when you need something.

It’s nice to have the Strandcafé back. It’s not a place to visit more than twice a month, and its claim of having the best ribs in Vienna is debatable, but the world was poorer without it, and this wrong has now been righted.