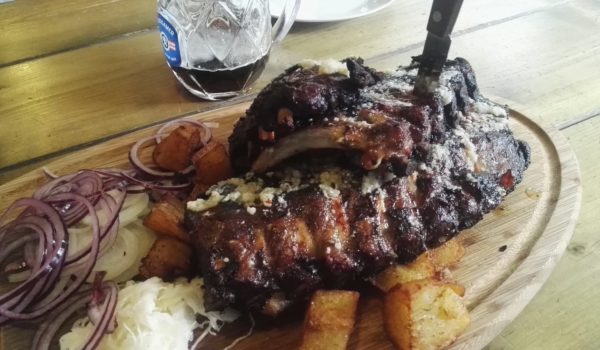 The day after half-exploding striving to finish a Schweinsbraten-heavy Brettljause, I am back in Hopfen & Malz to try their “self-marinated” spare ribs. “Self-marinated” is what the menu said, and that was enough to attract my interest, especially following my recent experiences with the ribs that had not been marinated at all.

Indeed, Hopfen’s ribs were marinated, though the marinade made them burnt more than it added to the taste. This is not a complaint, by the way: burnt ribs are infinitely better than undercooked ribs. The main reason why I could not fully assess the marinade’s quality, however, was the mistake of ordering the garlic variety of the ribs, which differ from the “classic” version only by being covered by a thick layer of grated garlic. In that, the cook went badly over the top, as the garlic taste, combined with the taste of fresh onions, did not leave me the following night and even the next day’s morning.

The sauces were, unfortunately, of the most boring kind and definitely not self-made. I don’t know who has decided that spare ribs should be served with pink pepper-flavored and white garlic sauces, but 90% of restaurants follow that tradition. The potatoes, lazily roasted with no spices, would not win any awards either.

Despite dull side dishes, the spare ribs themselves were above average, if only by a tiny margin. They were quite fat but not disgustingly so; the meat was easy to separate from the bones but did not look or taste pre-boiled; and the quantity was such that I left the restaurant feeling fuller than after the huge Brettljause the day before.