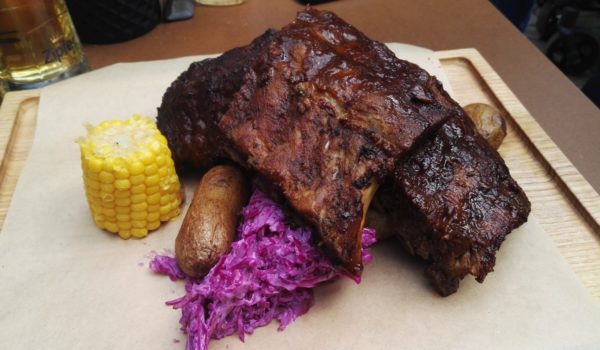 First were spare ribs, next came burgers, now every restaurant thinks it is not going to survive unless it serves pulled pork. So far the only pulled pork sandwich I really enjoyed came from a mobile stand at one conference; all the other were lazy attempts to capitalize on the Austrian obsession with everything pig.

Die Allee, a relatively new restaurant in the middle of Prater, has spare ribs, burgers and pulled pork, so theoretically its future is bright. Indeed, not long ago Falstaff listed Die Allee as one of the best places to eat spare ribs in Vienna. With all respect to Falstaff, if I were to compile such a list, I would have kept it much shorter and quite certainly excluded Die Allee.

On the other hand, if you are a fan of smoked pork, you might enjoy Allee’s ribs much more than I did, because at the end of the day, that’s what they are: smoked pork. Or perhaps boiled and then smoked, because the way the meat easily fell off the bones was highly suspicious. With just a few movements of the fork, the detached meat could also be turned into something indistinguishable from pulled pork in terms of appearance or taste. I wonder if there is some sort of cooking optimization at work here.

Peculiar consistency aside, the ribs actually tasted quite good. In accordance with the name, they were generously marinated and did not taste boring despite the unusual absence of sauces. A few sauces were available from the menu at additional cost, and I suggest you take a couple of them to improve the experience.

For a restaurant by a busy main road of the Prater park, die Allee is not at all bad. Its terrace is reasonably cozy, the waiters are friendly enough, and only the music coming out of the speakers is stupidly inappropriate, loud and annoying. But don’t expect it to be a Schweizerhaus for spare ribs.