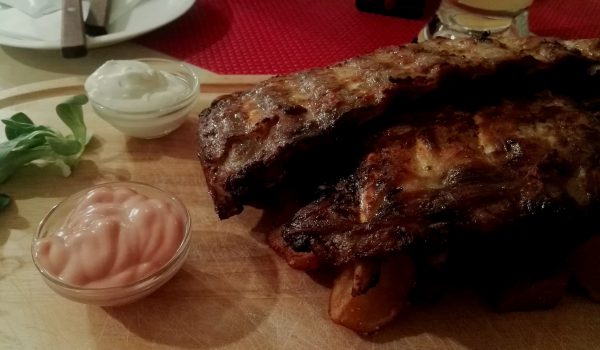 What do the film Movie 43 and Bierstöckl’s spare ribs have in common? They are both tasteless. However, while the film is occasionally funny, there is absolutely nothing funny about Bierstöckl’s ribs. Unless you find travelling to the opposite side of the city and paying 17 euros for two racks of dead pig hilarious.

The whole story is that I did not go to Hetzendorf for the ribs. The goal was to try the Brettljause that I found on the online menu of a Heuriger sharing the address with Bierstöckl. Apparently, the Heuriger and the beer restaurant belonged to the same owner. However, apart from a huge sign, there was certainly no trace of the Heuriger, and even the waiter did not know anything about it. My suspicion is that the Heuriger closed but the sign and the website remained.

It is hard to imagine more boring ribs than the ones Bierstöckl’s cook had managed to make. The complete absence of marinade required a heavy use of the two sauces to obtain any kind of taste, while the sauces were of the most generic sort. The meat was certainly pre-cooked and warmed up, very greasy and contained tiny pieces of bones threatening to break my teeth. The picture above has some contrast added to it, but in reality, the ribs had a rather unappetizing pale brown color. Even the potatoes were cooked without any love and, like the ribs, seriously lacked salt.

I left the restaurant full and slightly sick, mainly because of the desire to finish this uninspiring dish as quickly as possible. In retrospective, the dinner at Bierstöckl was probably worse than no dinner at all.