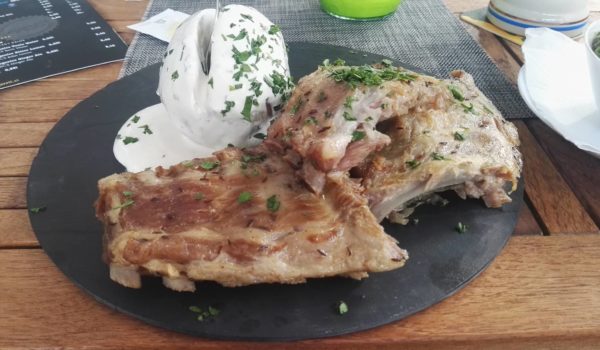 Something is wrong between me and spare ribs these days. First, I got served boring ribs with almost no marinade. A few weeks later, they were followed by acceptable ribs with no sauce. Next came truly above-average ribs, but again lacking marinade, that time totally. Today I got something unique: spare ribs with neither sauce nor marinade. And as you can judge yourself by their unappetizing grayish color, they had hardly been grilled.

I suppose they had been boiled first and then microwaved. The way the meat separated from the bone at the slightest touch points toward the former, while the slight brown tint you see on the photo hints at the latter. However, the amount of fat I found inside was a strong indicator that a few more minutes inside the microwave – or, better, on a pan – would have been beneficial.

OK, I am lying. In the state that the ribs were served, they were beyond salvation. The only reason I am not giving them an even lower score is because the cook had somehow managed to eliminate any taste. The equivalent ribs with a strong pork flavor would have been disgusting. The way these ribs had been cooked, they simply tasted unpleasant. Even the baked potato was unpleasant, tasting like something that had been baked, left alone for quite a while and the put into a microwave for a shorter time than necessary.

If you are in Wels (which can only be by mistake because the town is quite pointless), Sgerstl is worth a visit because of its excellent homemade beer served in funny mugs with metal caps. After the ribs fiasco, I would not try any food there, however.